Britain Is A Nation Of Retail Workers

An astonishing 2.7 million people now work in the UK's retail sector, making it by far the biggest ‘employer’. Many are employed in local branches of supermarkets where staff numbers have been swelled in recent years by working mums lured by part-time hours and shift work offered.

The figures from freelance marketplace PeoplePerHour show that nearly a million people work for the big four supermarkets.

Of the 2.7 million people working in retail, Tesco, Sainsbury's, Asda and Morrisons employ a total of 984,000.

The figures show how Britain has moved from an industrialised nation of miners, steelworkers and other manufacturing jobs to the service sector.

In the early 1800s French emperor Napoleon famously dismissed Britain as a "nation of shopkeepers", meant as an insult to their prowess on the battlefield.

The number of shop workers is far higher than the second biggest employment sector, construction and contracting. 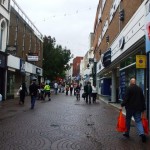 The third biggest employment sector is engineers who now number 800,000, while there are currently 610,000 teachers and 369,868 nurses, according to PeoplePerHour.

The number of designers has risen to 232,000, sparked by the growth in companies specialising in websites, apps and other digital technology.

A total of 1,560,000 people work in the National Health Service, while 432,000 are employed in the armed forces and police combined.

"Our figures show the number of people working in retail outlets has clearly boomed with more supermarket branches, longer opening times and the popularity of online shopping among Britons.

"It is staggering that the big four supermarkets now employ nearly a million people, many working mums attracted by the part-time hours offered.

"The recent recession has forced many into self-employment, but as we enter a recovery period, the number of self employed people continues to grow. It's clear that Brits actively want to be their own boss, choose their own hours and be in control of their destinies."

Taylor Report is a “Common-sense Approach to Employment”

Retirement rethink for many over 45s

CBI's Katja Hall to step down as Deputy Director-General