– Britain’s householders encouraged to improve their own properties this winter

Energy experts today revealed that some of TV’s best known soap characters are setting a bad example for British householders by wasting hundreds of pounds each year – living in poorly insulated homes with low-quality heating and low energy efficiency.

This winter energy consultants TheGreenAge have carried out virtual Green Deal Assessments on properties from EastEnders, Coronation Street, Emmerdale and Hollyoaks (reflecting a cross section of Britain’s most common homes) to raise awareness of the challenges facing households and highlight the money saving actions that could help reduce their bills.

The worst offender was the two-bedroom, mid-terrace Albert Square home of EastEnders’ Dot Branning. Taking into account the nature of the property, as well as the number of residents and their lifestyles, TheGreenAge awarded Dot’s property an energy efficiency rating of just 2.5/10. They found that Dot could be wasting in excess of £290 every year through a combination of no insulation, single glazed windows, draughty doors and an ancient boiler.

“Soap homes may be fictional, but their heating dramas aren’t. Homes in the UK are some of the least energy efficient in the world, but getting a Green Deal assessment gives you the expert advice on how you can take action. Raising awareness of energy inefficiency as an issue and highlighting how improvements could be made is vital – with far too many households wasting warmth and money at a time when they can least afford it." 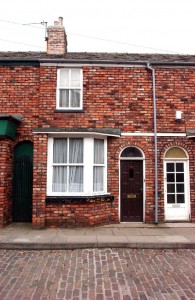 In addition to reducing their energy use, they could also potentially generate an income – after advisors at TheGreenAge recommended the installation of Solar PV ‘panels’ on the south-facing roof of their home.

At the other end of the scale, Hollyoaks veteran Tony Hutchinson’s 1980s Cheshire flat topped the energy efficiency table – scoring 7/10. The flat is relatively modern compared to the other soap properties assessed and was totally renovated following a major fire in 2010. It now boasts the latest insulation and heating technology, which helps Tony reduce his fuel bills whilst keeping his home warm and cosy.

The Green Deal is a Government backed initiative which aims to help people in England, Wales and Scotland improve the energy efficiency of their homes, without having to pay all of the costs up front.Anyone taking out a Green Deal finance plan to pay for some or all of the improvements repays this amount over time through their electricity bill. Repayments should not be more than the savings they should expect to make on their energy bills after making the improvements.

For free and impartial advice or to find out if your home could benefit from initiatives like the Green Deal and Energy Company Obligation (ECO) contact the Energy Saving Advice Service on 0303 123 1234 or visit www.energysavingtrust.org.uk.

Financial Planning Week: what should I ask my adviser?