Paul Bonhomme won his fourth Red Bull Air Race of the season on Sunday in Fort Worth with a sensational performance in the Texas heat but Australia’s Matt Hall stayed right on his heels in the championship battle with a solid second place finish.

Japan’s Yoshi Muroya got his second podium of the season with third place in the high-speed, low-altitude racing just above the tarmac of the Texas Motor Speedway with the pilots hitting speeds of up to 230 mph. It was a disappointing day for the Americans with Michael Goulian taking ninth and Kirby Chambliss eleventh.

Saving his best flying of the weekend for the moment when it counted most in the Final Four race, Bonhomme was invincible in the race track and said he was absolutely thrilled to get his 19th career victory in front of a big Texas crowd of more than 30,000 spectators at the famous NASCAR race track. The two-time world champion from Britain stopped the clock in 55.285 seconds with Hall trailing close behind in 56.052 seconds. Hall flew superbly to get second place and keep the championship race alive with his sixth podium in seven races this season. 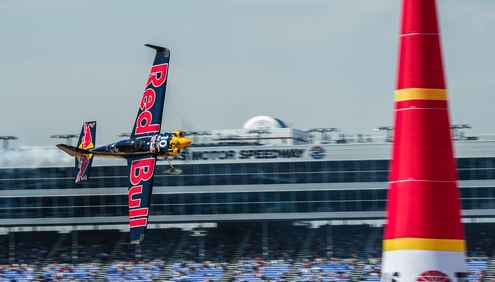 Going into the final race of the season in Las Vegas on October 18, Bonhomme leads the championship with 67 points after getting 12 for the win in Fort Worth while Hall is still within striking range on 59 points.

The battle for third place also heated up on Sunday with Martin Sonka, who got fourth place in Fort Worth, moved to 28 points and within two points of Hannes Arch of Austria (30). Nigel Lamb of Britain (20), Pete McLeod of Canada (19) and Matthias Dolderer of Germany (19) are all also in the chase for third place.

Buying a Car Which You Can Afford

British Beer Sales Up for the First Time in Ten Years

Have a butcher's at W.J. George in Talgarth