A number of options are being considered that could lead to the closure and selling off of the Britannia Royal Naval College (BRNC) site in Dartmouth.

The Express reports on a leaked memo that suggests the college could be merged with the rating training establishment at HMS Raleigh in Torpoint, Cornwall. Or both establishments could be closed and merged at another site.

Before we as a nation just accept this and assume that the only repercussions of this potential closure would be to send some old wooden admirals apoplectic with rage, let’s consider what this impressive establishment has done for the nation and what it still has to offer.

Royal Naval officer training has been conducted at Dartmouth since 1863. Firstly onboard the moored vessel HMS Britannia, then in 1905 training was transferred to the college buildings overlooking the river Dart.

BRNC’s mission statement – “To deliver courageous leaders with the spirit to fight and win”.

The buildings and grounds are magnificent and where better to train the Royal Navy of the future than in the halls and dormitories that have been trodden and slept in by our heroes from the past? Officers that served in both World Wars as well as conflicts such as the Falklands War.

This isn’t some sort of business training that can be delivered from the inside of any old port-a-cabin by PowerPoint. We ask these people to put their lives on the line for us, something that needs to be instilled and nurtured in those young people.

Just go to the BRNC Website and take a look at thepictures and videos of the Senior Gunroom or parade ground and ask yourself, ‘is this not the place to train the future defenders of our nation?’ 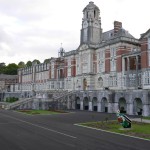 It’s also not as if the Royal Navy just takes toffs to put in these privileged and much sought after places in the college. All those wishing for a place in the College have to pass the Admiralty Interview Board (AIB) based at HMS Sultan in Gosport Hampshire. The AIB is a three day test putting candidates through academic, physical, mental and aptitude tests. It doesn’t matter who you know, what your background is or how rich you or your family is; if you make the grade you pass. They make sure they get the best people they can!

And before the usual arguments are trotted out about cost, how many bailed out banks are relocating out of the city to save money? And would MPs and Lords ever consider shutting down the Palace of Westminster and moving to cheaper accommodation in Liverpool say?

We need to show our servicemen and women how valued they are, not keep shafting them.

I am hoping that BRNC gets a huge overhaul and all naval training gets moved there, both officer and rating. Let’s create a naval training establishment the parents of the nation can be proud to send its future defenders of liberty to.