The Jaguar F-TYPE Coupé has been immortalized on canvas by one of the world’s leading automotive artists, Tim Layzell.

Ian Callum, Jaguar’s Director of Design, said: “As a design team, it’s paramount we create Jaguars that make people smile. As Tim’s art also makes me smile, asking him to produce a painting to commemorate the launch of F-TYPE Coupé was a natural fit – and the resulting work is very special indeed.”

Tim Layzell, began his career at just 13 years of age when his work was recognised by the British Racing Drivers’ Club. 19 years on, Tim’s work sells to collectors worldwide. Jaguar has always been a favourite manufacturer for Tim – one of his BRDC award winning paintings was of the 1953 Le Mans-winning Jaguar C-type – so the opportunity to get involved with a project around F-TYPE Coupé was immediately of interest.

“I was, of course, very excited,” said Tim. “To me, the F-TYPE Coupé is everything a sports car should be: beautiful, fast, and it sounds amazing.

“The angle of the Coupé that I’ve chosen to paint shows off some of what I feel are its most exciting design cues; the tail lights, the deep-draw rear wings and its dramatic roof line. I wanted to paint it in a situation we’d all love to be in, driving through the mountains in late afternoon sunlight and shadows, while perhaps chasing another piece of exotica, in this case the F-TYPE Convertible!” 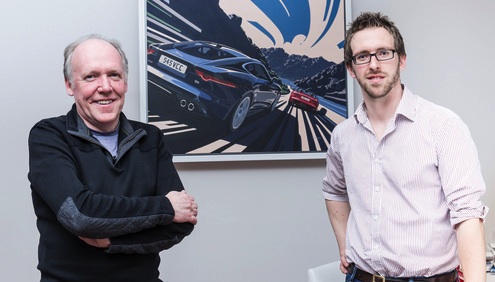 How the Budget Divided the World of Gambling