Britons are against British armed forces getting involved in military efforts on the Korean Peninsula – but would support the United States taking action.

A solid majority (57%) of Britons would oppose British Armed Forces taking part in US led military action against North Korea if it continues to develop long range missiles, while less than a quarter (24%) would support this. Even in the event of an outright attack on the South by North Korea, more people (47%) would oppose British involvement than support it (34%).

There is strong support, however, for the US taking action on its own. When asked the same questions without mention of UK involvement, the numbers are inverted: 44% support the United States taking action against North Korea if long range missile development goes on, while more than six in ten (63%) say they would support US military action against North Korea in the event of an attack on the South. 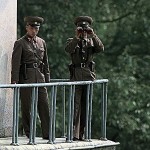 US opinion on North Korea:

The numbers are strikingly similar to the results of a YouGov USA poll last week which showed that when Americans are asked the same questions, 45% support US military action in the event of continued missile development and 58% support it if North Korea attacks South Korea.

The survey also confirmed that the British public are less convinced than their American counterparts of the gravity of the recent sabre-rattling by North Korea and its young leader. Forty-four per cent of Britons think the recent threats by Kim Jong-un are merely a political stunt, versus 39% of Americans.

You can see more on this story on YouGov’s website with interactive data graphs.