Landlords in Great Britain have seen total annual returns of £111.5bn in the last year, as the private rented sector (PRS) continued to grow apace, according to the second edition of Kent Reliance's Buy To Let Britain report.

The PRS has undergone rapid expansion in the last year. The sector grew by nearly 150,000 households in the year to March, with rented accommodation accounting for 77.4% of new households created across all tenures. This rapid growth has led Kent Reliance to forecast that on present trends, the sector will increase from 4.8 million households in Great Britain to 5.5 million by 2020. 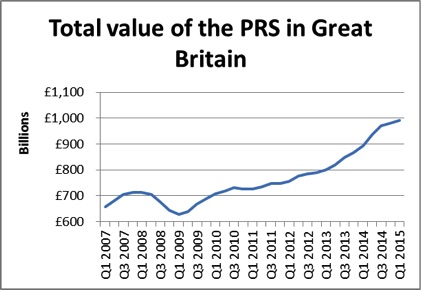 The expansion of the sector has supported the rise in its value. At the end of March, the total value of property owned by landlords in Great Britain stood at £990.7bn, increasing by 11.0% in the last year. The sector's value is now equivalent to 43.1% of the value of the UK's Stock Market, up from just 12.2% fifteen years ago. 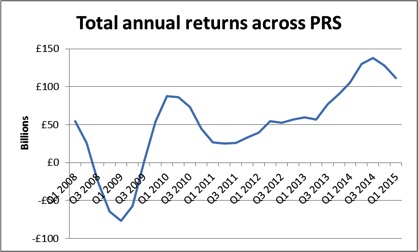 House price inflation also contributed towards the increase in the sector's value. Although slower than its recent peak last year, annual inflation remains brisk at 7.5%. This is also supporting gross total annual returns. By the end of March, the average property generated return of £24,221 in rental income and capital gains, just £1,000 less than the average salary over the past 12 months. This is equivalent to 12.5%.

Across Great Britain as a whole, this meant that annual returns seen by property investors totalled £111.5bn, £67.2bn in capital gains, and £44.3bn in rents. In total, this figure was £5.8bn higher than the £105.7bn landlords saw in March 2014, although it represented a decline compared to the recent peak of £137.5bn in September, when capital gains were at their highest in at least seven years.

Andy Golding, Chief Executive of OneSavings Bank, which trades under the Kent Reliance and InterBay brands in Buy to let, comments:

"Buy to let has come of age, moving from a niche asset class to one big enough to rival the stock market. Landlords are seeing the benefit of a structural change in Britain's housing market, with tenant demand ever strengthening. Yes, house prices are showing signs of steadying somewhat, but growth remains brisk. Long-term price inflation is not in danger, given the gaping chasm between growing demand for housing and the number of houses being built each year. Combined with the dearth of high LTV lending to first time buyers, this will continue to buoy demand for rental accommodation, as well as landlords' returns, and the sector will continue to expand.

"Supporting the growth in the number of experienced landlords with growing portfolios is crucial to providing the investment necessary in the sector to match demand. The mortgage market is playing its part, with remortgaging vibrant, and an increasing array of second charge options to suit landlords' needs."

Kent Reliance's analysis suggests the total value of the private rented sector will surpass £1 trillion within the next four weeks, and climb to £1.07 trillion by March 2016.

Kent Reliance's research team analysed ONS census data to establish the size and growth of the private rented sector. Rental property prices are based on the average differential between rental property and house price data from Land Registry and Registers of Scotland. Rental data incorporates figures taken from Citylets and yield data from LSL Property Services. All rental and property value data has been weighted to account for the changing regional composition of the private rented sector. Buy-to-let mortgage data is based on analysis of figures from the CML and ARLA. Rental data is limited to the period between 2007 and the first quarter of 2015.

The Rise of Alternative Lending in the UK