A new report has revealed that overseas buyers accounted for 15% of new homes purchases in London in 2013.

Whilst some may be surprised by this figure because headlines often talk of much higher percentages being sold overseas, the research makes the following observations:

• Very few, if any, major developments are marketed exclusively overseas.

• Overseas sales drives tend to focus on the earlier launches, often to secure the release of project finance. The best funded developers can be selective with overseas marketing and sell some schemes exclusively in the UK, but this is often not an option for smaller builders.

• The proportion of overseas buyers in any particular development is highly location dependent – it can be higher than 80% in Prime Central London but lower than 10% for much of outer London.

At the same time the report concludes that there is no evidence that new homes are being left empty.

The findings of the research explains how economic and financial climates have influenced the market and its transitory nature and illustrates how the exceptional economic circumstances of the last few years have had a direct impact on investment in the London property market.

The report reveals that 39% of new build homes in 2013 were bought by owner occupiers and 61% by investors. The majority of these investors buy the new homes to let, accounting for 48% of all purchases. In addition to this, most of the properties that were bought to sell ended up as rental stock, and build-to-rent stock is by definition bought for renting out. 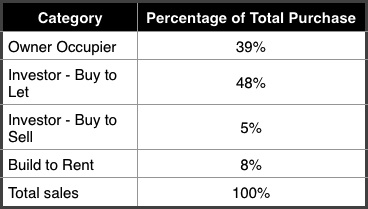 Figure 1, below, has been provided by Savills' residential research team and indicates the split between investors and owner occupiers across a range of price bands for buyers in developments marketed by the agent. According to Savills, owner occupiers dominate at the lower end of the market 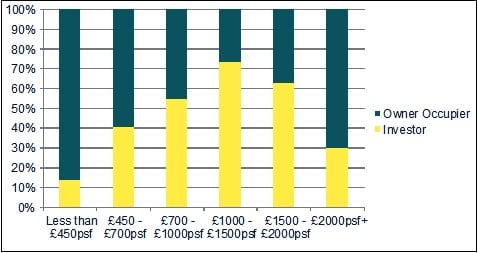 Separately, the study looked at rental demand in recently completed developments. Across 107 developments in London, there were no cases where tenant demand was considered low. In light of the strength of demand in London's rental market, the BPF has welcomed findings that the majority of the flats bought as an investment are returned to the market, therefore satisfying the demand for rental homes.

The fledgling build to rent sector is also starting to make a contribution to the capital's housing need, with 8% of homes delivered for PRS. The BPF welcomes this as an encouraging start to the large scale private rented sector model that it has long supported, as it suggests that the capital is moving towards providing a strong, customer-focused, easier-to-manage PRS which will cater for London's growing rental market.

The report expects that the market is likely to shift, in the short term at least, towards a 50:50 owner occupier and investor relationship during 2014, illustrating how sensitive the market is to economic circumstances. As the domestic market begins to recover from the worst recession since the Great Depression, a shift towards owner occupation is likely to take place as the economy picks up and a stronger pound makes international investment less attractive.

"We shouldn't forget that we are just emerging from the worst recession since the Great Depression. The last few years have been difficult for housing providers, with house building, lending to the sector and mortgage availability all dropping off a cliff. Accordingly the industry, like any manufacturing industry, has had to diversify into new markets. Investors looking to pre-fund new developments have helped get projects off the ground and kept people in jobs.

"Raising capital to fund any type of development has been very difficult over the past few years, so that those who helped keep development going, including investors, during that time should be congratulated not pilloried. Accordingly, as the economy starts to stabilise, owner occupation levels are likely to rise.

"To see such high levels of new build stock being returned to the rental market is also encouraging, as we can see that tenant demand is fierce. Unless we increase supply, more homes for home-ownership will mean less for renting, and so we are simply shuffling the desk chairs. The only way to get us out of a housing crisis is to build more homes. Promising build-to-rent figures show a high quality and professional rental market could be part of the solution and is starting to get established in the capital."

The research shows that in 2013 overseas buyers accounted for 15% of new homes purchases London wide, and that this percentage is not uniform across the city. According to Knight Frank, in prime central London, 49% of new build properties are purchased by overseas investors, compared to only 20% in Inner London and 7% in Outer London.

The report draws attention to how it is important how you define 'overseas buyers'. As 37% of London residents were born overseas, but many are active in the London housing market, the research has defined 'overseas investors' as those who are not usually resident in the UK. As an indication of the impact this definition makes, Knight Frank's research explains that, while 49% of purchases in prime central London are by overseas residents a further 20% are by foreign nationals resident in the UK.

The research shows that few new developments have been marketed purely overseas and that there is no evidence that a significant number of new homes are being left empty.

The BPF cannot support owners leaving homes empty for the long-term, when supply is so scarce, but cautions that there are existing powers to tackle empty homes and policymakers need to understand why they don't work before adding yet another layer of measures.

"London benefits hugely from its role as one of the few truly world cities and so it is natural people want to live in and invest in our city. In a world where increasingly the opportunities are international, we should be careful we are not seen as sending out the wrong signals that the UK is becoming more parochial and protectionist, which could have negative consequences for overall investment in the UK, and London's place as one of the world's great cities.

"Politicians are, however, right to raise the issue of empty homes and providing consideration of any additional measures on that takes place within a proper review of existing incentives and disincentives they may find us surprisingly supportive. Our members' sole rationale is to invest in property to let it out, not to hoard it."

"Investment in London's housing stock has kept some semblance of an industry going over the past few years and amen to that. As we inch towards economic recovery it is important that we give more opportunities for all types of owners to buy property, something which the industry subscribes to. A recovering mortgage market will also help, but what we need most is an inexorable focus on increasing supply, rather than fighting over what supply there is."