• “No Gloom At The Inn”: UK B&Bs and guesthouses see a surge in bookings in the wake of Article 50 signing

• “The full English (and Welsh and Scottish)”: Brexit vote, lower pound and growth in international visitors lead to mini boom for B&Bs

• Forward bookings are up 19.2% versus the comparable pre-Brexit vote period.  Family-friendly locations have seen a dramatic 56.9% uplift

A combination of a low pound, the Brexit vote and the triggering of Article 50 has delivered a surge in bookings at Britain's world-famous Bed and Breakfasts.

Analysis of booking data from more than 5,000 Bed and Breakfasts carried out by eviivo, the leading online booking specialist for independent hotels and B&Bs, indicates that forward bookings are up 19.2% year on year compared with the same pre-Brexit-vote period.

"There's no doubt that the Brexit vote and subsequent invoking of Article 50 have had a measurable positive impact on bookings at Britain's B&Bs. There is no gloom at the Inn.  Our B&B customers are seeing two benefits from a lower pound. First, more bookings from U.K. consumers concerned about their reduced spending power abroad. Second, an increase in bookings from international customers, keen to take the opportunity to enjoy a British break at a favourable exchange rate.”

A poll of eviivo’s 5,000 Bed and Breakfast owners also found that the majority support the Brexit decision.  The result was slightly more decisive than the actual poll, with 48.3% favouring the decision to leave the EU and 45.8% favouring continued membership.  The remainder were undecided.  Almost two thirds (65.2%) said that there was no need for a second referendum.

Areas of the country benefiting the most from the upswing in bookings are Central England, Northern Ireland and Scotland. 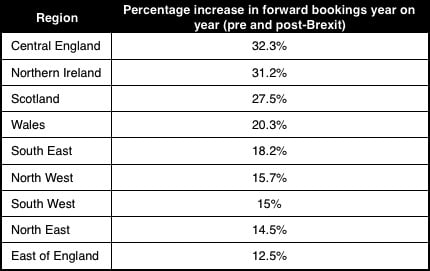 Thomas Messett said: “It’s great to see such a strong performance from Central England, dispelling the myth that the B&B is all about the seaside.  Country pursuits are a huge part of British leisure time and this performance demonstrates that.  It’s also encouraging to see Northern Ireland, Scotland and Wales doing so well.  The strong performance is a truly national trend.”

Seaside towns in particular have witnessed a rising tide of popularity as many travellers choose to forego leap-frogging flights to European seaside destinations and focus instead on the British seaside's nostalgic charms.  Seaside B&B bookings in towns like Torquay, Bognor, Brighton, Penzance, Scarborough, Blackpool and Great Yarmouth have been especially buoyant since the Brexit vote. 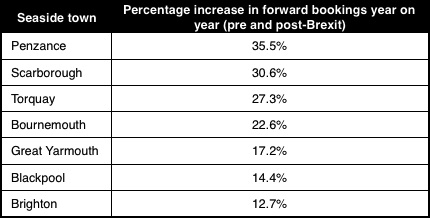 Thomas Messett said: “It’s great to see some of the smaller seaside locations performing so well against names that we would think of first when we think of the British seaside.  The British seaside offers incredible variety, as our owners in the top-performing Penzance and Scarborough will testify.”

Britain's iconic Bed and Breakfasts have experienced a slow and steady renaissance in recent years, with British tourists' growing enthusiasm for home grown holidays.  eviivo’s booking analysis also found that family-friendly locations have seen a dramatic surge in popularity.  B&Bs labelling themselves as family-friendly have seen bookings up a staggering 56.9% as families tighten their belts and choose British breaks.

B&B owners are also benefiting from a levelling of the promotional playing field online. eviivo’s technology enables B&B owners to compete alongside large impersonal hotel chains without the need for a huge marketing budget.  A recent deal with Ryanair is also stimulating demand for bookings at B&Bs using the eviivo platform.

Thomas Messett added: “British B&Bs are part of our heritage, but they’ve shaken off the clichés of the past.  Today’s B&Bs are colourful, quirky and often luxurious and are far more memorable than bland chain hotel rooms. British B&Bs offer a glimpse of real Britain and unique comfort and hospitality that you just can’t get in impersonal hotels. The lower pound will bring a surge of new tourists to B&Bs which is great news for British tourism."

Having a baby? How to make the transition from full time work to full time mum