Britons Favour Onshore Wind Over Fracking by Three to One

• Government accused of ignoring own research on energy policy

The majority of people in Britain would prefer to live near a wind farm than a fracking site, new YouGov research commissioned by Ecotricity revealed today.

When given the choice, 62% said they would rather have a wind farm in their local council area than a fracking site, with just 19% preferring to have fracking nearby.

The research comes as Ecotricity founder Dale Vince today accused the Government of contradicting its own research on public attitudes to onshore wind.

The Department of Energy and Climate Change (DECC) has been conducting its own Public Attitudes Tracking Survey since July 2012 – with the latest results showing that 64% support onshore wind, with only 28% of people supporting fracking in the UK.

But while both polls reflect a continued public preference for onshore wind over fracking, the Government is reportedly preparing pre-election promises to the contrary, with generous tax breaks and planning short cuts for fracking – while potentially bringing the development of onshore wind energy to an end.

“You have to ask why the Government is ignoring the results of its own surveys on both wind energy and fracking – they are actively going against public opinion on both issues. If Cameron and the Conservatives believe that wind energy is worth opposing because it is unpopular, who do they think it is unpopular with? The Government's own polling clearly shows that they can't be thinking about the general population. What level of approval does wind power need in order to shape the Prime Minister's energy policy?” 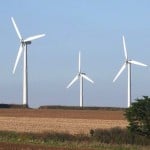 Reports suggest that the Government is to offer greater commitment to solar and offshore wind at the expense of onshore wind, while the attack on onshore wind continued last week as the Communities and Local Government Secretary, Eric Pickles, announced an extension to a special planning policy enabling him to call-in and make personal decisions on renewable energy projects for another 12 months.

Dale continued: “Sacrificing onshore wind for offshore wind and solar makes no economic sense, especially in these times of austerity and cuts. Onshore wind is the cheapest form of renewable energy available to us; large solar projects cost bill payers 50% more per unit of energy made, while offshore wind costs 100% more than onshore.

“We need all three forms of renewables for our long term energy security, and keeping onshore wind in the mix keeps the overall cost of green energy down. It's illogical to pay more for green energy than you need to – and this from a government that only recently blamed the cost of supporting green energy for the rising price of our nation's energy bills.

“Government policy on this issue makes no sense, whether you measure it by public opinion, financial cost or the energy security. It only makes sense if you see it as political manoeuvring. We need an energy policy driven by facts not politics, working in the long-term interest of our country – and that would have to incorporate onshore wind.”

62% said they would rather have a wind farm in their local council area than a fracking site, with just 19% preferring to have fracking nearby. 19% did not know.

• Wind more popular than fracking amongst supporters of all four parties

• Fracking is more popular with the older generation