Brits are upbeat about the property market

• Over half of homeowners predict house price increases

New research from Santander Mortgages reveals that 10 per cent of Britons (equivalent to 5.1 million people) believe they are likely to successfully purchase a new home in the next 12 months, up from 8 per cent (3.7 million) in January 2012 showing how upbeat Brits are about the UK housing market.

A major cause says santander is the government's Help to Buy scheme with 33 percent of those who think they think they will purchase a home in the next year saying they are likely to use the scheme's assistance.

57 percent of those planning to buy a home are more positive about their prospects than they were 12 months ago and only 8 percent were more negative.

Despite the high prices Londoners were most confident about their chances of with 20% believing it likely that they would be buying a home within the next 12 months up from 13 percent a year ago. Whereas only 2 percent of those in Wales thought it likely down from 7 percent a year ago. 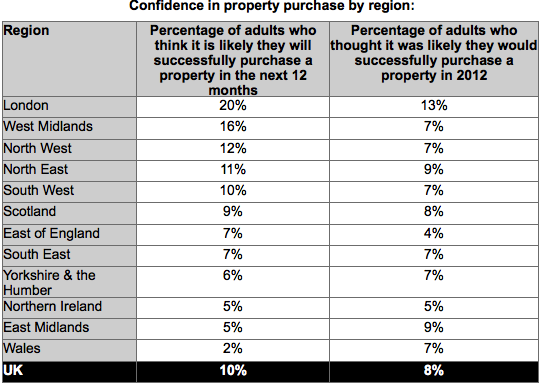 Of those who are likely to buy a new home this year, a third (33 per cent) will be first time buyers, while just under a third (32 per cent) are already homeowners and intend to move. A further 13 per cent will be buying an additional property to the one they already own and 11 per cent plan to buy to let.

Of those who feel they are unlikely to buy a new home this year, the most significant obstacle is not having enough money for a deposit (16 per cent). This is a particular problem for those aged 18 to 34, a third (32 per cent) of whom cite this as a reason for not purchasing in the next 12 months. This is, however, significantly less than the 42 per cent of 18-34 year-olds who claimed this was an obstacle a year and a half ago, further supporting the argument that the Help to Buy scheme is having a positive effect on confidence.

One in 10 people (11 per cent) say they can’t afford to buy in the area they want to live in and 8 per cent are simply unable to get a mortgage.

Five per cent of aspiring home buyers say they can’t find a property they like within their price range; an additional 4 per cent say unemployment is the main reason for not buying; and 3 per cent say it’s because they are worried about losing their job. Others have made a conscious decision not to buy, with 4 per cent preferring to rent. 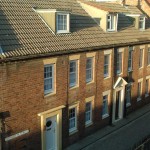 Homeowners are very confident that house prices will rise this year, with 57 per cent of them anticipating an increase in the value of their property compared to just 4 per cent predicting a fall in value. This is a significant increase in confidence since the beginning of 2012, when 29 per cent anticipated a price rise compared to 17 per cent expecting a fall. Over a third of homeowners (37 per cent) expect their property’s value to remain static over the next 12 months.

Phil Cliff, Director of Santander Mortgages, said: “The UK has seen a number of encouraging economic statistics emerging in recent weeks and months and our findings suggest a significant increase in confidence in the housing market. Help to Buy is certainly stimulating the market and the extension of the scheme from January 2014 should see existing homeowners who have been unable to move entering the market again.

“It is still vital that prospective buyers look around for the best deals and get some sound advice in terms of properties and mortgages, however. At Santander we want to be front of mind for all homebuyers and we’ve just re-launched our mortgage product range to give our customers the freedom to choose a mortgage that meets their needs now and in the future. The range includes products with a choice of features including no booking fees, no ERCs, overpayment options and cash-back giving customers the freedom to choose the right mortgage to meet their needs. And all Santander 1|2|3 Current Account customers benefit from 1% cashback on their Santander direct debit mortgage payments too – whatever Santander mortgage they have (limits apply).”