Brits 'Moonlight' During Lunch Hours And Weekends to Pay Bills

• Number of Brits ‘moonlighting’ more than doubles in 12 months

• Struggling: 65% take on extra work to pay for heating or food bills

The number of Brits ‘moonlighting’ in a bid to supplement their incomes, has more than doubled in just twelve months according to online freelance marketplace PeoplePerHour. Those registering on the site to earn extra cash alongside a full or part time job has risen by 110% to just over 190,000. A recent poll of moonlighters revealed that a surprising 65% are taking on extra work just to pay their heating bills or to cover the weekly food shop.

The figures also revealed that the majority (77%) of moonlighters are so-called ‘five-to-niners’, working in the early evenings on top of their full-time nine-to-five day jobs, while more than half (58%) work weekends. A quarter (24%) are making the most of their lunch hours, by selling their skills in small chunks of time, while 18% shun sleep and work through the night to earn some extra cash.

Those surveyed are selling a range of skills to increase their incomes – not only professional skills for small businesses such as design, bookkeeping and copywriting, but ‘hobbyist’ skills too, such as fixing bikes, walking dogs, writing best man speeches, date planning and researching family histories.

PeoplePerHour has seen a big rise in people selling ‘hobbyist’ skills for as little time as an hour, through the website’s Hourlies section. Launched in July 2012 Hourlies advertise packets of work sold in bite sized quantities for a fixed price and delivered typically within 3 days. For example I can help you trace back your family three generations for £40 or I can write you sales letter for £22.

Why are people turning to ‘moonlighting’? For almost four in ten (39%), it seems moonlighting is keeping them from serious financial trouble: 21% are taking on extra work in a bid to pay down debts, while 25% are doing so to pay off their summer holidays. Worryingly, over a third (36%) are moonlighting just to be able to afford to heat their homes. (See Table 1 below for full figures)

The figures also revealed that Liverpool and Manchester are UK hotspots for moonlighting. Over the past 12 months alone, the cities have seen an increase of 164% and 163% respectively in the number of full-time employees taking on extra work. Bolton isn’t far behind with an increase of 148%. (See Table 2 for full figures)

The following table shows the top eight reasons for moonlighting. 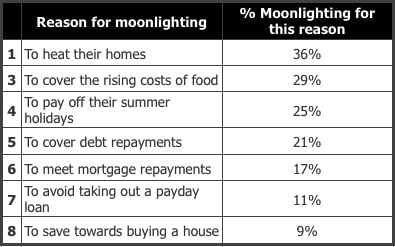 The following table shows the top 20 towns/cities in the UK that have seen the greatest increases in the number of people moonlighting over the past 12 months:

Xenios Thrasyvoulou, founder and CEO of PeoplePerHour, comments:  “It seems that as austerity measures take their toll on finances, Brits are finding their entrepreneurial spirit and making every spare moment count.

"The cost of living will inevitably keep increasing over the year and will be an issue for workers in the UK, but for the foreseeable future wages are not going rise with inflation, which would explain the droves of people taking on second and sometimes third jobs.

“Although the north of England has been particularly badly hit by the recession, they are also proving the most entrepreneurial, with Liverpool, Manchester, Bolton, Newcastle and Leeds all leading the way when it comes to moonlighting.

"Many people have realised that free time can be lucrative, and giving up two hours in front of the TV in the evening, or an afternoon in the pub on a Saturday, can be put to good use.

“The internet has given everyone access to a global marketplace, so the opportunities to sell your skills are limitless. And we are now seeing a growing number of people, tapping into this marketplace, who may not have thought they had a skill to sell. These are the hobbyists who are making money from non-professional skills, such as fixing bikes, writing best man speeches, tidying gardens, and selling these skills or services in small chunks of time.”

A crash is coming, but not yet