Brush twice a day and save your life

Following research from the University of California* on the links between poor dental health and the risks of developing dementia, the British Dental Health Foundation, is reminding people about the importance of maintaining a good oral hygiene routine.

The California research that followed nearly 5,500 elderly people over an 18-year-period, found that those who reported brushing their teeth less than once a day were up to 65% more likely to develop dementia than those who brushed twice daily.

Dr Nigel Carter OBE Chief Executive of the British Dental Health Foundation said: “Following a good oral health routine is pivotal in the prevention of gum disease, which has been found to be associated with a number of other life changing illnesses including, heart attack, stroke and diabetes.

“Unfortunately, gum disease progresses painlessly on the whole so that you do notice the damage it is doing. If the disease is left for a long time, it can be more difficult to treat. If you suspect you have gum disease you should speak to your dentist. The warning signs are, blood on the toothbrush or in the rinsing water when you clean your teeth. Your gums may also bleed when you are eating, leaving a bad taste inyour mouth.

“The Californian research shows that only brushing once a day or less could lead to a greater risk of developing dementia. Who would think that something as easy as brushing your teeth twice a day for two minutes could potentially save yourlife.”

The British Dental Health Foundation recommends a simple routine of brushing twice a day for two minutes with a fluoride toothpaste and cleaning between the teeth with interdental brushes or floss, practising good eating habits, having sugary foods and drinks less often and regular dental check-ups as often as your dentist recommends.

*Research Published in the Journal of the American Geriatrics Society 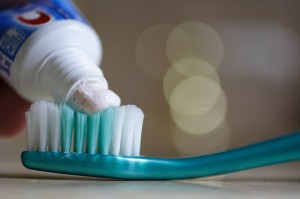 Image by Thegreenj (Own work) [GFDL (http://www.gnu.org/copyleft/fdl.html) or CC-BY-SA-3.0 (http://creativecommons.org/licenses/by-sa/3.0/)], via Wikimedia Commons

The Avebury Ring and I

More than a third of kids in England are overweight/obese