The current woes of News International coupled with Nick Clegg’s intervention calling for Murdoch to withdraw his News Corporation bid for BSkyB have thrown severe doubt on the future of the deal, leading to a 6% plus fall in the BSkyB (BSY) share price.

It is reported that the culture secretary, Jeremy Hunt, has written to the communications regulator Ofcom to see whether Rupert Murdoch’s News Corporation is considered fit and proper to continue with the deal or even to hold a broadcast licence. The letter could also end up placing the deal in the Competition Commission’s in-tray. If this goes badly for News Corp they may well also have to give up all their shares in BSkyB.

Over the course of a week the BSkyB deal has gone from a 90% certainty of going ahead to a 90% chance that it will not according to Analyst Alex DeGroote of Panmure Gordon stockbrokers.

Some people do see this drop in BSkyB share prices as a buying opportunity, one being CityWire’s Dumb Investor.

News Corp owns 39% of BSkyB shares and had initially made a 700p approach for the remaining 61%. The shares rose to a high as a result, but the News of the World phone hacking scandal and the deal now being seen as a dead duck has caused the price to drop down to the region of the approach figure, which is still well above the normal range of 500-600p prior to the announcement of the deal. 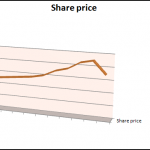 Speaking to the BBC the deputy prime minister, Nick Clegg, said “On the BSkyB bid, Rupert Murdoch is now in town in London seeking to sort things out. I would simply say to him, look how people feel about this. Look at how the country has reacted with revulsion to the revelations. So do the decent and sensible thing and reconsider: think again about your bid for BSkyB.”

Another point to consider is the directors’ liabilities with relation to the RIPA 2000 and phone hacking. Where s.79 makes them personally and criminally liable if they knew, or should have known, of such goings on.

Labour? LibDem? Conservative? Other? Who would you choose in July 2011? Vote in the new poll HERE!