George Osborne will be feeling somewhat more positive than 12 months ago when he delivers his Budget speech on Wednesday and leading spread betting company Sporting Index predicts he will take four sips of water during his speech.

Osborne has needed to quench his thirst regularly since becoming Chancellor and two years ago he took a record eight sips. Neither Ken Clarke nor Gordon Brown touched a drop during their time at Number 11, but Alistair Darling, in 2010, reached for the glass twice.

Sporting Index are also predicting that Osborne’s speech will last 57 minutes and that the Speaker will have to interject with “Order, Order” twice.

“Osborne is sitting pretty at the moment with the UK economy in its rudest health for quite some time,” comments Sporting Index spokesman Wayne Lincoln. “But what punters need to decide is if he will refrain from hydrating this year as he’s not quite so hot under the collar, or drink in his success with even more sips than normal.” 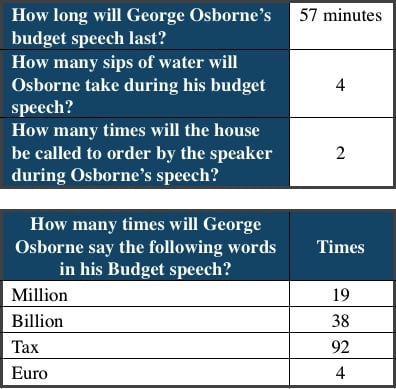