Responding to the announcement by the Ministry of Justice (MoJ) of changes to the prison estate, Frances Crook, Chief Executive of the Howard League for Penal Reform, said:

“Today’s announcement by the Ministry of Justice is a mixed bag and I fear ministers are making long-term decisions to meet immediate budget pressures without underpinning those decisions with bold leadership and vision.

“Closing failing prisons is the right move to make but without a coherent strategy to reduce prison numbers it will make the problem of overcrowding worse.

“The government finds itself closing prisons with one hand while proposing to build new supersized prisons with the other, prisons that will be too large to manage effectively and which will store up many more problems for future administrations.

“Building new prisons in the place of old ones merely repeats the mistakes of the past.

“Given crime continues to fall year on year, Chris Grayling should grasp the nettle and start making the case that we simply do not need to put so many people behind bars in the first place.”

The MoJ has confirmed that a 2,000-place prison is to be built in Wrexham, North Wales.

Frances Crook said: “The idea that big is beautiful with prisons is wrong. Not our words, but those of David Cameron before he became Prime Minister.

“All evidence shows that larger jails find prisoners more difficult to control, drug abuse and violence are more prevalent and opportunities for education and training are limited in such crowded environments.

“If the Government wants to spend Â£250m on boosting employment opportunities in North Wales, there are much better ways of doing that than building a huge jail.”

The MoJ is also to embark on a feasibility study focusing on the possibility of replacing Feltham prison with a large new adult prison and a new youth facility on adjoining sites in West London.

Frances Crook said: “Feltham has been a disaster of a prison for the young people held within its walls. The jail recently received one of the worst inspection reports in recent memory and it is right that the government now looks to close this abysmal chapter in the history of prisons. 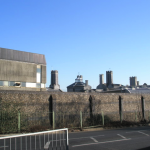 “We are deeply concerned however that ministers would consider building a new prison on the same site, a super-sized prison that would repeat the mistakes of Feltham and amplify them many more times.

“The larger a prison the more difficult it is to control, with drug abuse and violence prevalent and opportunities for education and training limited in such crowded environments.

“Given Feltham’s primary function is to house children and young people on remand from the London courts, we would be absolutely opposed to those young people being crammed into a new super-sized prison for adults as an afterthought.”

Latest SWIFT Index Forecasts EU27 is moving out of recession