Christmas has come early for the jobs market with seasonal jobs up significantly compared to last year, showing renewed confidence among businesses in the busy festive trading period.

Jobs in the retail sector are up 49 per cent compared to November 2012, and the logistics and transport sector has shot up 73 per cent year-on-year ahead of what is the busiest time of year for many businesses.

At the same time, annual jobs increases for construction and property (69 per cent) and estate agency (23 per cent) continue to reflect growing demand within the property market, although significant rises in the sector since the summer may further fuel concerns of a housing bubble.

The monthly job index, which is compiled using data from over 160,000 vacancies advertised on reed.co.uk, now stands 28 per cent higher than in November 2012. The latest figures follow a number of record-breaking rises for the index during 2013, and show that many businesses are actively planning to take on additional staff in the New Year.

For the second consecutive month, each of the 33 industry sectors listed on the index is showing year-on-year growth in jobs, while 11 out of 12 UK regions are showing growth compared to last year. As well as sharp annual rises in retail and transport and logistics, the voluntary and charitable sector has seen a significant increase in jobs in November ahead of the season of goodwill, with 11 per cent more positions advertised than in October 2013.

The figures suggest that the retail sector is anticipating a strong Christmas, despite the latest figures from the CBI showing disappointing shopper numbers in September and October.

While the festive period is seen as a crucial time of year for the economy, sectors not associated with the season are also showing ongoing business confidence. Year-on-year increases for manufacturing (47 per cent) and automotive (66 per cent) give further positive indicators for the economic recovery.

Yet, while opportunities are continuing to rise, salaries remain unchanged, with wages languishing at the same level as this time last year and one per cent lower than when the Reed Job Index began in 2009. 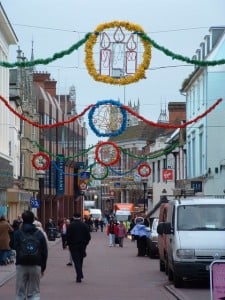 “Christmas is a crucial time of year for many businesses and a strong performance over the period can be the difference between a good year and a bad one. After a few years of disappointing Christmas performance, it’s encouraging to see businesses recruiting with confidence as they once again look to the festive season as a cornerstone of this year’s trading.

“However, the latest figures are not just a seasonal fillip. Core industries, such as manufacturing, continue to show strong jobs figures, adding weight to a growing body of evidence that growth will accelerate next year.”