Two burglars have been told by a judge that they took on the risk of being shot at when they broke into an isolated rural home.

One of the men had been shot in the face and the other suffered gunshot wounds to his right hand when they broke into the Welby home of Andy Ferrie on the 2nd September.

Although the two burglars were apprehended, Mr Ferrie and his wife Tracey were held in police custody for 40 hours due his use of a firearm during the incident. He said that one of the men was reaching into a drawer containing knives when he came across them early in the morning.

Judge Michael Pert QC’s words to the two burglars, Joshua Gorman and Daniel Mansell, have been welcomed by justice campaigners.

The judge said “If you burgle a house in the country where the householder owns a legally-held shotgun, that is the chance you take”.

The two men pleaded guilty to their crime but claimed that they had been traumatised by the experience. The judge dismissed this saying that they could not come to court asking for a lighter sentence because of it.

This case has been hailed as a return to putting the rights of the true victim back in their rightful place as opposed to the perceived recent moves towards that of regarding the criminal’s rights as paramount.

The MPs Alan Duncan (the local constituency MP) and Patrick Mercer both praised the judge for his stance as did the Tory candidate for Police and Crime Commissioner in Leicester, Sir Clive Loader.

The only concern we should have is whether or not this could lead to burglars preparing to ‘go equipped’ with a weapon themselves rather than forego the opportunity of the potential spoils. The last thing we need is an arms race between burglars and potential victims. 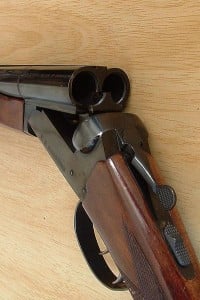 Image by Commander Zulu at en.wikipedia [Attribution], from Wikimedia Commons