This very recently discovered asteroid, 2012 BX34, will though be of no threat to our planet.

Even if it were on a collision course it would not make it through our atmosphere, it would need to be at least 140 metres across to achieve even localised damage according to the report in the Daily Mail.

2012 BX34 will not be visible to the naked eye but amateur astronomers with the right equipment should be able to observe it.

And the Telegraph reports that this will be one of the twenty closest approaches to our world [1]. Earlier estimate that it would skim past at an altitude equal to some of our geostationary satellites have now been proved as unfounded. 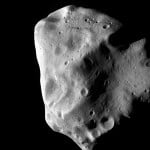 There are far more of these passes than you would think. More information on this particular asteroid and others far larger that pass much further away can be found using the NASA close approach tables. These also give access to orbit diagrams where known.

But the close approach tables do show how busy it is up there. Hence the birth of projects like ‘NEOShield’.

What actions do we need to take today to prepare for the inevitable technological disruptions of the next twenty years?