Economic optimism increased by 7 points to 12%, but still signals a continued sluggish pace of growth

Confidence in business prospects increased by 4 points to 33% 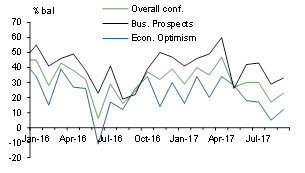 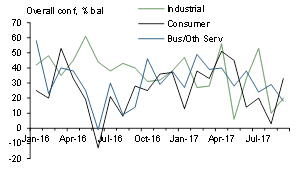 Overall business confidence rose by 6 points to 23% in September, according to the latest Business Barometer from Lloyds Bank Commercial Banking.

Economic optimism increased by 7 points to 12%, the second lowest level this year. The share of companies who were more optimistic about the economy increased by 1 point to 34%, while those who were pessimistic fell by 6 points to 22%.

Firms’ confidence in their own business prospects increased by 4 points to 33%. This was driven by a 1 point increase to 44% in those expecting higher business activity in the next year and a three point drop to 11% of those expecting lower activity.

Confidence in both business prospects and economic optimism remain below their respective long-term averages.

Companies’ hiring intentions remain positive despite the net balance of firms expecting to increase headcount over the next year falling by 1 point to 26%. Thirty-three percent (unchanged from last month) indicated that they expect to increase staff levels while 7% (up from 6%) anticipated a reduction. The result is only slightly lower than the average (30%) over the past year, during which time the unemployment rate has fallen to a four-decade low of 4.3% (in July).

Business confidence increased most in the North in September, by 16 points to 19%. However, sentiment was highest in the South where it increased by 7 points to 30%. Businesses in the Midlands reported decreased confidence, falling by 8 points to 16%.

Confidence in consumer services rose strongly by 30 points to 33%, outperforming both the industrial sector (up 10 points to 20%) and the business & other services sector (down 11 points to 18%).

“The September report shows that overall sentiment increased, but it remained below the long-term average of 32%. The increases in both business prospects and economic optimism signal that the economy continued to expand in Q3 but at a slower pace than last year.”