Overall business confidence fell 13 points to a one-year low of 17%. Economic optimism fell by 12 points to 5%, the lowest level since June 2016. Confidence in business prospects decreased by 14 points to 29%, lowest level for 3 months. Firms’ intentions to hire stayed positive, edging up by 2 points to 27%. 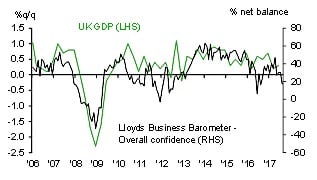 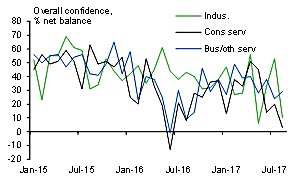 Overall business confidence fell 13 points to 17% in August, according to the latest Business Barometer from Lloyds Bank Commercial Banking. This is the lowest level since August 2016.

Sentiment in the industrial sector, covering manufacturing and construction, fell to a 3-month low of 10%. Consumer services confidence also dropped to a 14-month low of 3%. In contrast, overall confidence in business and other services rose by 5 points to 29%.

Profit margins remain under pressure, with the net balance unchanged at -8%. The proportion of companies reporting higher margins compared with three months ago rose 5 points to 15%, but this was offset by a 5 point rise in the share citing lower margins to 23%.

“The August report shows that overall business confidence has fallen to the lowest level for 12 months, with sentiment weakest among consumer-facing firms. While confidence overall is now just under the long term average, firms’ hiring plans remain robust.”