• Up to £10bn of additional business finance to be unlocked

Business Secretary Vince Cable has today confirmed the appointment of Ron Emerson as the first Chair of the government-owned British Business Bank.

Ron Emerson will play a crucial role in leading the institution, including the process to appoint a CEO for the institution later this year. He has a strong background in international banking, the SME finance landscape as well as experience in financial regulatory regimes. He is an active member of the faculty at the Said Business School, University of Oxford.

The Business Secretary has also today confirmed that Christina McComb has been appointed as Senior Independent Director. She is a former Chief Executive of C5 Capital Ltd, and is currently senior independent director at Standard Life European Private Equity Trust and several other SMEs and equity investment firms.

The British Business Bank's purpose is to support economic growth by bringing together public and private sector funds to create more effective and efficient finance markets for small and medium-sized businesses in the UK. The institution will consolidate many of the government's existing small and medium-sized business finance schemes, as well as an extra £1 billion of funding, which the Chancellor announced at Autumn Statement last year. 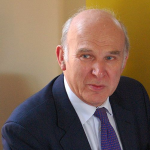 "This is an important milestone in the establishment of the British Business Bank. Ron Emerson and Christina McComb bring a powerful combination of business finance and policy experience that will ensure that the bank improves the supply of finance to smaller businesses.

"The UK is coming out of the worst recession since the 1930s with a badly damaged banking system. Helping businesses to access the funds they need to grow is key to our recovery. By working closely with the markets, the British Business Bank will help unlock up to £10 billion of additional finance for small and medium sized businesses over the next five years. This will help ensure the Business Bank becomes an established feature of the British financial landscape."

"This is an idea of its time. The UK has long needed a more effective set of financing options for smaller businesses, and the British Business Bank will be a key catalyst in this process.

"Good progress has already been made by the Department on the existing programmes that will move into the Business Bank. Lending and investment through these programmes is up by 58 per cent in the first half of 2013 compared to the same period last year and we will continue to build on this momentum."

"I am looking forward to bringing my experience in equity finance and elsewhere to the British Business Bank to make it an effective and powerful institution.

"The British Business Bank will play a critical role in improving the access to finance environment in the UK and I am looking forward greatly to playing a role in its development."

The British Business Bank programme is currently operating from within the Department for Business, Innovation and Skills (BIS). These operations will transfer into a public limited company, chaired by Ron Emerson and managed independently of government, once BIS receives EU state aid approval, expected in Autumn 2014.

Marking the first steps in establishing the institution's identity, the 'British Business Bank' branding and marketing strap line 'Unlocking finance for smaller businesses' have today been unveiled. A new British Business Bank website will be launched next week.

Since the initiative was first announced a year ago, rapid progress has been made in getting the interim organisation structure established and in increasing the impact of programmes it manages, including:

– on an annualised basis, over £500 million of new financing is now reaching smaller businesses as a result of British Business Bank programmes

– in total, a stock of £1.3 billion of loans and investments is supported by the British Business Bank programme

Further developments over the course of the next 3 months will include:

– completing the appointment of a permanent CEO

– launch of the first in a series of capital and funding solutions for SME lenders designed to improve the conditions for lending to smaller businesses, subject to regulatory approval.