* UK companies' optimism about the UK economy continues to improve and is at the highest level since February 2010
* Businesses' confidence in trading prospects remains at the highest level since October 2007
* Both indices, taken together, point to a continued improvement in the UK economy. This is supported by an increase in confidence across all sectors and UK regions over recent months
* Following a "bounce" in expected staff levels during June, firms' plans for further recruitment has stabilised.

Business confidence in the economy rose strongly last month and is at the highest level since February 2010, according to the latest Lloyds Bank Commercial Banking Business Barometer. Sentiment regarding firms' own trading prospects also improved, to its strongest level since October 2007.

Businesses remain confident about their own trading prospects

Businesses remain upbeat about their own trading prospects over the course of the next year with the net balance of this index edging up by one point to 56 per cent in August following a four point rise in July. The index continues to be at its highest level since October 2007. The share of positive responses was unchanged from last month at 59 per cent, while negative responses dropped by one point to three per cent. Taken together both indicators point to a robust outlook for economic activity over the rest of the year, following the 0.3 per cent and 0.7 per cent quarter-on-quarter increases in GDP during Q1 and Q2 respectively.

This view is supported by the sector and regional breakdowns of both indices which show that the latest gains have been broad-based across all sectors and UK regions.

The average of both balances for the industrial, consumer services and business and other services sectors has increased by 11, 16 and 22 points to 60 per cent, 49 per cent and 58 per cent respectively over the last three months.

The same period has seen corresponding gains of four, 22 and 24 points in the Midlands, North and South to 54 per cent, 46 per cent, and 62 per cent respectively. 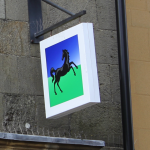 The survey also asks about firms' expectations of a change in staff levels over the next year compared to the previous twelve months. After a "bounce" in June, the net balance has been stable for the last two months. This may indicate a wish by firms to boost productivity through using the existing workforce to meet any pick up in demand. However, this stability masks differing sector and local trends. In particular, the reported outlook for hiring in consumer services which includes retail sales and distribution has softened since June, while prospects in business and other services and the South has picked up.

Trevor Williams, Chief Economist, Lloyds Bank Commercial Banking, said: "Over the past few months, businesses have become increasingly confident about the wider economy and their own trading prospects which augurs well for the UK's future economic prospects."