Britain has taken the historic step in using its veto for the first time in over 50 years and is the only country not to agree to a new treaty. Nicolas Sarkozy instead hailed a “historic” breakaway “euro plus” bloc, enabling them to pursue further economic unity with a new treaty outside the EU.

After an 11 hour showdown, Mr Cameron explained that he had to veto the treaty because France and Germany refused to grant the City of London immunity from another wave of EU directed regulation.

The Foreign Secretary William Hague said the PM’s decision was “very sensible” and would not isolate the UK in European affairs. Signing up he said would have resulted in a loss of national sovereignty.

Mr Cameron said, “I came here with one of two outcomes in mind: safeguards that made a treaty within a treaty, a complex legal structure, or if we could not have that, allowing others to go off in a treaty on their own and ensuring that the EU is maintained as a single market. I had to pursue very doggedly what was in British national interest. It is not easy when you are in a room where people are pressing you to sign up to things because they say it is in all our interests.” 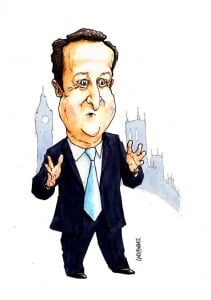 It is understood that Sarkozy and Merkel had put a great deal of pressure on the PM to sign a new treaty, but he would not do so unless he had safeguards against new regulations, including a financial transaction tax that would affect Britain proportionately more than other EU members. Mr Cameron stated that he was not prepared to ask British MPs to accept a treaty change.

“It is sometimes the right thing to say, ‘I cannot do that, it is not in our national interest, I don't want to put that in front of my parliament because I don't think I can recommend it with a clear conscience, so I am going to say no and exercise my veto’,” he said.

The PM demanded that if he were to sign the treaty, he must be granted a “legal protocol” within a new treaty to protect the City of London as well as ensuring Britain’s continued participation in the European single market.

The “euro plus” bloc of 26 member states is currently working on a new treaty outside of existing EU legislation. How long it will take is unknown due to the sheer legal complexity of the matter. The new treaty will however mean a genuine loss of sovereignty for the signatory countries, involving tighter budgetary rules and more severe punishments for running deficits over 0.5% of GDP(currently at 3%). Tax harmonisation will also be included, potentially having devastating effects on the competitiveness of member states’ abilities to attract new investment. Will Ireland still be permitted to have a 12.5% corporate tax, or will it have to increase this nearer to Germany’s 30%?

Many of the smaller nations in the euro plus group are growing more concerned about Franco-German dominance, particularly on tax harmonisation where many eastern European and Baltic states would attribute a lot of their economic success to their ability to manage their own budgets.

Merkel also added that a further â‚¬200Bn would be made available for purchasing bad debts, the money coming directly from EU members. However, city insiders have said that if they wanted to go down the path of buying bad debt, the fund would have to be closer to â‚¬3Trillion to satisfy the markets.

What the financial markets are also looking for is if the European Central Bank (ECB) will judge that the agreements set out allow the ECB to continue being involved in protecting countries still facing an imploding debt crisis. The FTSE 100 rise today so far doesn’t show that the markets are wholly satisfied, rising only 0.8%.

There is more that the ECB could do, for example if it chose, it could bring down the cost of borrowing for countries like Italy and Spain – but so far hasn’t taken action towards this.

The sovereign debt crises engulfing the EU is likely to continue to be at the forefront of the market’s concerns, and unless Europe can solve this, there might not be a euro-zone to argue over in future.

Homeowners consider remortgaging for a monthly saving of Â£171