Campaigners delivered a box of coal to HSBC’s Canary Wharf headquarters this morning, with a message calling on the bank to pull out of financing the global coal industry.

The campaigners from the World Development Movement, wearing hardhats, set up a ‘climate crime scene’ outside the bank using hazard tape.

The UK’s biggest bank, HSBC is also the UK’s biggest underwriter of fossil fuel bonds and shares says the WDM. Between 2010 and 2012, HSBC helped fossil fuel companies raise £75 billion, double the figures mustered by either Barclays or RBS. As well as oil and gas investments, the bank facilitates the coal mining industry through its support for companies including global mining giants Anglo American, Xstrata and BHP Billiton.

The World Development Movement warns that coal investments are currently fuelling a ‘carbon bubble’ in which banks are investing in fossil fuel reserves which cannot be burnt without breaking international climate change commitments. The group says that a sudden correction of the current overvaluation of fossil fuel companies could cause a new global financial crisis.

“HSBC claims to be reducing its CO2 emissions, but the bank is only referring to a small proportion of its true emissions – for instance the electricity is uses in its offices. It doesn’t consider any carbon emissions which come from bankrolling fossil fuel firms.

“In fact, HSBC pours billions of pounds a year into yesterday’s resources – threatening both climate and financial ruin.

“Burning coal not only gives off more carbon emissions than any other fuel, but mining coal leads to massive displacement and pollution across the world. The Cerrejón coal mine in Colombia has seen the eviction of whole villages from their land and threatened the only reliable water supply in the region. HSBC provides financial support to the three multinationals involved in the project”.

The World Development Movement is calling on HSBC to disinvest from coal projects and companies, as well as taking steps towards eliminating its involvement in the oil and gas industry. It is also calling on the UK government to regulate the banking system away from its dependency on carbon intensive industry. 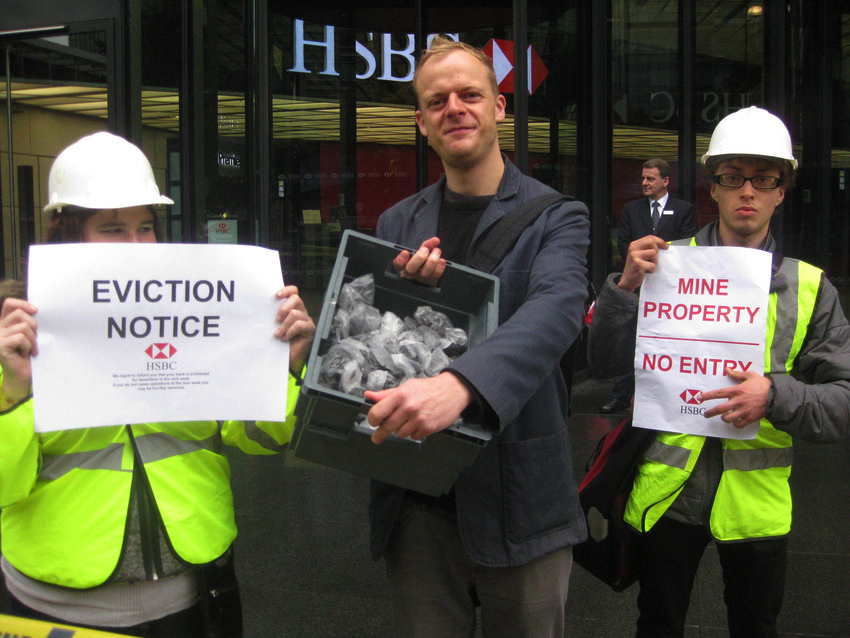