The Canadian dollar climbed for the second straight trading session on the heels of a stronger than expected Canadian employment report released this past Friday, and a solid housing starts report. The robust news has helped the yield differential between the US and Canada favors the Canadian dollar.

On Friday, while the US Department of Labor reported a slightly better than expected employment report, Canada Statistics released its update on Canadian employment which showed its largest increase in more than a decade.

According to Canadian Statistics, the number of jobs created in May rose by 95,000, the most since August 2002. In addition, unemployment rate declined to 7.1 percent from 7.2 percent despite an increase in the labor participation rate. The job gain tripled the average analysts' estimate of 30K. The 95K increase is a very large number. As the US labor pool is approximately 10 times the size of the Canadian pool the increase would be equal to an increase of 950K jobs in the US.

On Monday, the Loon received another boost after CanStat released stronger than expected housing data. Home prices in Toronto, climbed 5.4 percent in May from a year ago, the biggest increase in five months, according to the Toronto Real Estate Board. In addition, Canadian building permits rose in April led by multiple-unit housing in Vancouver.

Permits rose 10.5 percent on the back of a revised 6 percent rise in March, according to Statistics Canada. The gain was the fourth in a row, the longest streak of increases in a decade. Economists had forecast a 3 percent decline in April. 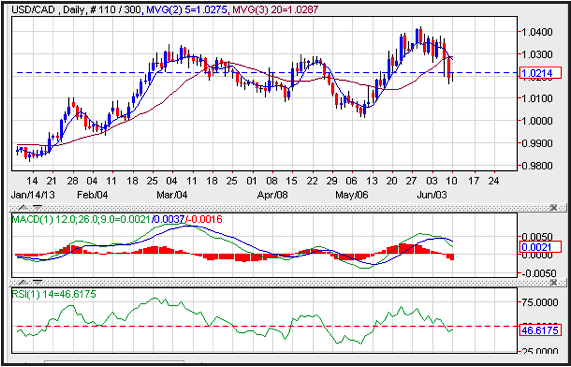 The strength of the Canadian economic picture is driving the interest rate differential between the US and Canada to levels that have not been seen in 2013. The Canadian benchmark 10-year note climbed higher to 2.14, giving it a positive differential against the US 10-year note and making holding Canadian dollars more attractive.

Grimstone warns London will lose out if UK leaves EU