As the Canadian government pushes a new law rendering pipeline companies liable for all damages from leaks and spills, the only friend to both sides in this polarized world of dirty oil sands is leak prevention technology.

On May 14, amid heightened opposition to two planned pipelines, Canada's Natural Resources Ministry unveiled a new law making pipeline operators liable for all the costs and damages related to oil spills, regardless of whether the operators were at fault or demonstrated negligence.

Under the new law, pipeline operators will be required to set up advance clean-up funds for future spills, while the Canadian National Energy board will be given the authority to order operators to reimburse those affected by spills.

According to the Tar Sands Solution Network, "tar sands oil is more corrosive and transported at higher pressures," while "spills of tar sands crude are significantly more toxic and harder to clean up."

In fact, according to the organization, "Alberta has seen 28,666 crude oil spills since 1975, an average of two per day."

What oil sands opponents fear most is the rapid expansion of production capacity that is necessitating the creation of more pipeline networks and oil tankers threatening spills across North America.

In addition to this, new research by the Canadian government alleges that toxic chemicals from Alberta's oil sands tailing ponds are leaking into groundwater and making their way into the Athabasca River.

The latest study used million-dollar technology that allows scientists to fingerprint chemicals and trace their origins. This has been a sticking point until now because the soil around these Alberta tailing ponds contained chemicals from naturally occurring bitumen deposits, and earlier technology was not capable of separating them from the industry chemicals.

The industry in Canada is reportedly addressing the issue of toxic seepage from its tailing ponds by footing the bill for more than $1 billion in new technology.

At the same time, investments in the latest leak detection technology may also be hastened by mounting opposition to pipeline development and new Canadian legislation that makes prevention much cheaper than clean-up. 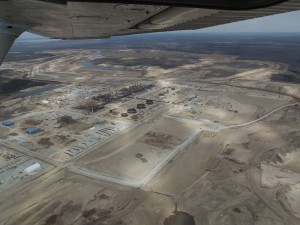 In doing so, the new technology also demonstrated its ability to detect very small oil sands leaks, long before they become catastrophic.

"We are very pleased to have had the opportunity to demonstrate to a third-party oil sands operator our ability to detect very small release rates from a low volatility crude oil product," Adrian Banica, CEO of Synodon Inc, said in a press release. "As far as we are aware, Synodon has the only commercially available airborne liquid hydrocarbon leak detection system in the world that has been proven to be capable of detecting both gaseous hydrocarbons as well as a wide variety of liquid products from pentane to gasoline, condensates and crude oil."

RealSens technology was developed under the Canadian Space Program and by Synodon scientists.

Canada's new pipeline infrastructure is about to become much more expensive as legislative changes focus on prevention, liability and preparedness.

Without this legislation, new technology, such as that used in the latest study on tailing pond seepage into water supplies, and pipeline leak detection advances, may have seemed prohibitively expensive to operators. However, with the specter of footing to bill for any and all spills, regardless of operator negligence, preventative technology suddenly seems rather cheap.

A snapshot of the UK's property investment concerns