Caro Emerald on course for number 1 album this Sunday

Caro Emerald looks set to enter the UK charts at Number 1 on Sunday (May 12th 2013) with her second album ‘The Shocking Miss Emerald’, as revealed by the Official Charts Company today.

This would give Caro her highest UK chart position – her debut album, 2010’s ‘Deleted Scenes From The Cutting Room Floor’ peaked at number 4. Released on Dramatico/Grandmono, Caro’s trademark retro-pop is laden with wit, sass and style, a winning formula that has connected with fans throughout Europe.

Having sold out her March UK tour (including a night at the Royal Albert Hall) Caro recently announced a 14 date September tour which is already sold out. Caro will be performing on ITV1’s This Morning on May 10thÂ and will be appearing on BBC Breakfast on May 14th.

The Amsterdam Conservatory trained jazz vocalist is an original pop star with the look of a Hollywood icon of yesteryear and a voice that oozes warmth and vitality.Â ‘Deleted Scenes From The Cutting Room Floor’ sold more than 1.3 million copies across Europe, dominating the charts for 30 weeks in Holland, and in Britain spent nine weeks in the top 10 and was certified platinum. Caro performed on UK TV shows including Jools Holland’s Hootenanny, Strictly Come Dancing and BBC’s Children In Need and her music became a permanent fixture on the airwaves with Radio 2 adding all five singles to the A List and making the record Album Of The Week. Caro’s live performances included an astonishing set in London’s Hyde Park and at the Isle of Wight Festival and her sold out headline UK tour garnered rave reviews. 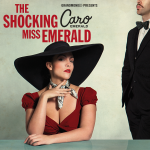 Caro has also dominated the German music scene, and recently picked up the prestigious Golden Camera Award for ‘Best International Music Artist’, the ‘International Newcomer Award’ at the Echo Awards andÂ  was nominated for the Swiss Music Award ‘Best Breaking Act International’. More recently, America has discovered Caro and in January she played sold out shows in Los Angeles and New York to great acclaim. Her live performance is not to be missed – reviewing the show at The Roundhouse, The Times declared the atmosphere to be “part carnival, part high-school prom”, praising her “magnificent vocals” and concluding that “When she finally bounced off stage, punching the air, it felt like a whirlwind had hit North London.”

The welcome return of "Garrow's Law"