Forget Greece and Italy, there are ‘dark times ahead’ for UK households ahead according to the latest YouGov HEAT survey. You can also forget the credit crunch and say hello to the ‘cash crunch’.

The Household Economic Activity Tracker shows that peoples’ confidence in the future state of their own financial position continues to decline.

The HEAT survey shows that a massive 46% of people now expect their financial situation to deteriorate over the next 12 months as opposed to just 15% expecting it to improve.

The results are based on 7,356 Britons who were interviewed between the 1st and 31st of October 2011 and asked if they expected their economic situation to get ‘better’, ‘worse’ or stay the same. The graph below shows the percentage of those expecting ‘better’ minus those expecting ‘worse’. Clue-negative numbers are not good. 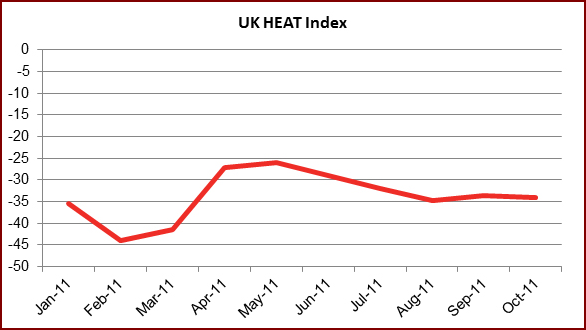 Alarmingly, over a quarter of households (28%) report that they have only Â£125 available to spend after paying housing costs, utility bills and taxes! Just last year this was at 21%, which is still far too high.

Then there’s the season of good will. ‘The cash crunch also appears to be manifesting itself under the Christmas tree with 40% of households planning to decrease their spending on Christmas gifts this season whilst only 7% increasing their spending.’ Says the report. Why are these people being punished for the banking crisis?

The good news, if you can call it that, is that 27% of the 1,538 employees asked expect to see their employers’ companies grow over the next year as opposed to 15% who expect to see shrinkage.

And the percentage of employees seeing their job security decline has fallen from 25% earlier this year to 20%. 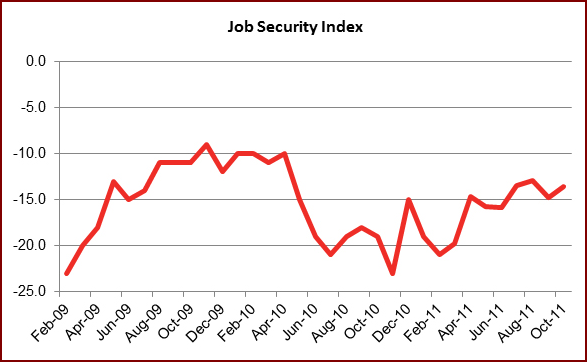 But 30% of employees are expecting their companies to lay staff off over the next year compared to 23% expecting new hires.

When looking at the employment market though 83% of all those asked thought that unemployment would rise with 31% saying it would go up ‘a lot’.

‘This broader trend fuels continued worries that any recovery in the UK's economy will be a jobless one; those who have employment may see an improvement in their situation, while those on the margins of employment may continue to see tough times ahead.’ Says YouGov.