Casting is announced for Simon Godwin’s production of The Two Gentlemen of Verona which opens in the Royal Shakespeare Theatre, Stratford-upon-Avon this July with a press night on Tuesday 22 July, before being broadcast live into cinemas worldwide, streamed into schools and transferring to Newcastle Theatre Royal.

Simon is Associate Director of the Royal Court, and he most recently directed Strange Interlude at the National Theatre. The production features Mark Arends as Proteus and Michael Marcus as Valentine. Mark recently appeared in Headlong’s 1984, and Michael’s credits include playing Henry Tudor in the BBC series The White Queen. Launce is played by Roger Morlidge, who has just finished appearing in the West End transfer of The Full Monty.

This is the first time in 45 years that The Two Gentleman of Verona has been performed in a full production on the Royal Shakespeare Theatre (RST) stage. The production will also be broadcast ‘Live from Stratford-upon-Avon’ to cinemas in collaboration with Picturehouse Entertainment during the performance in the RST on Wednesday 3 September and simultaneously screened in over 300 cinemas around the country whilst also being available in North America, Australia, Japan and Northern Europe. 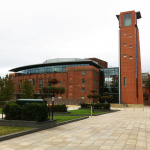 The production is designed by Paul Wills with lighting by Bruno Poet. The music is composed by Michael Bruce with sound by Christopher Shutt. The Movement director is Jonathan Goddard.

The Company is also offering another unique opportunity to schools across the UK to experience the production in the classroom with the The Two Gentlemen of Verona being streamed into schools in November 2014. As the first theatre company to broadcast its work to schools the RSC reached over 34,000 students with its opening streaming of Richard II in November 2013 which included a live Q&A hosted by Konnie Huq with David Tennant and Gregory Doran.

This hugely popular initiative is made possible through collaboration with Ravensbourne College. Alongside the webcast, the RSC will create an extensive package of online resources for use by teachers and students in the classroom, both in the lead up to the broadcast and for use as follow up materials afterwards.