Imagine Racing A Real Car In A Virtual Reality Helmet, Blind To The Real World…

In a world first, Castrol EDGE fused video games technology and a real world driving experience, using a modified car and virtual reality technology, so a computer generated world responded to the driver's and car's movements in real time.

The video game-like experience featured a mind-blowing landscape of falling boulders, crumbling track, tunnels, sheer cliff drops and even a cameo virtual appearance from another racing icon – with the landscape's shifts reacting to Matt Powers' every driving manoeuvre.

The challenge was part of Castrol EDGE's Titanium Trials, a series of high-powered driving challenges that bring man and machine together to push the boundaries of performance enabled by the strength of Castrol EDGE boosted with Titanium FST™ – Castrol's most technologically advanced and strongest oil to date.

Similar to Titanium Strong Blackout (the first Titanium Trial), the course was designed to push Powers and his Mustang to achieve maximum performance. Overcoming this challenge was made possible thanks to Castrol EDGE, enabling Powers to step up, push it and be Titanium Strong. 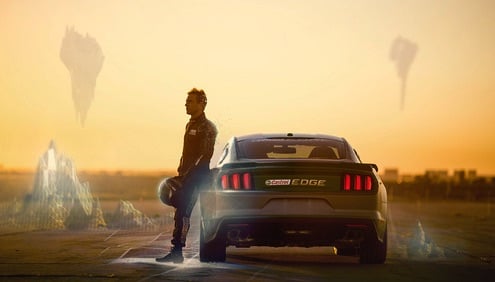 Castrol EDGE and creative technologists, Adam Amaral and Glenn Snyder, developed the all-new technology behind the trial. By extracting the data from the car's internal diagnostics (OBD2 data) and exterior positional tracking systems (GPS and inertial measurement), the team were able to sync the data with Power's Oculus Rift DK2 helmet, making a previously sit-down, stationary experience, now a mobile experience in a moving vehicle. For the first time ever, the team turned a real car into a giant game controller, allowing Powers to experience the virtual world through his helmet as he drove the course.

Everything from the steering angle and wheel spin, to the dynamic damping and throttle position was tracked, allowing Castrol EDGE to simulate the vehicle with near perfect accuracy in the virtual world. With the Oculus Rift DK2 updating 75 times a second, new technology was needed to match or exceed that rate, to give Powers a seamless driving experience. It's this expertise and granular attention to detail that helped bring the trial to life.