A video of illegal logging operations in the ecologically outstanding Raja Ampat Islands of West Papua has today been released by environmentalists following the arrest of rogue Indonesian cop-turned-smuggler Labora Sitorus, who financed and coordinated timber theft on a huge scale.

Filmed near the northern coast of Batanta Island in April 2009 by the London-based Environmental Investigation Agency (EIA), the footage documents loggers illegally felling trees without relevant Government approvals, before sawing them into planks and posts to await collection by boats at the beach.

The loggers told EIA investigators their operation was illegal but that it exclusively supplied Labora Sitorus, who they knew to be a policeman. The loggers also admitted they had been running nine chainsaws across multiple sites around the western tip of Batanta for at least 18 months, indicating Sitorus’ involvement in illegal timber had been going on since at least 2007.

With each chainsaw producing about 1.5mÂ­3 of sawn timber a day, the gang featured in the film was likely supplying Sitorus’ business with at least 4,000m3 of timber a year.Â  Loggers also trapped rare bird species for subsequent sale.

Sitorus’ recent arrest followed a report to the Papua police from the Indonesia Financial Transaction Reports and Analysis Center (PPATK) that more than US$150m had passed through bank accounts linked to his businesses in the past five years.

The money laundering report followed the May 2013 seizure of 2,264m3 of valuable illegal merbau wood in 115 containers in Surabaya, East Java, Indonesia’s biggest timber trade hub; all were supplied by Sitorus’ family timber company, PT Rotua. A further 1,500 merbau logs have also been seized in Papua, and Batanta island has been named as a major source of Sitorus’ illicit timber.

EIA is aware that environmental activists engaged in Government-recognised independent monitoring of Indonesia’s timber trade have been passing information to authorities regarding Sitorus’ activities for some time, leading to the timber seizures and the PPATK probe.

The timing of the case is interesting. Indonesia is currently rolling out a long-awaited but potentially revolutionary timber traceability scheme in an effort to assure international markets it has a handle on rampant illegal logging.

The Timber Legality Verification System (SVLK) aims to ensure Indonesia can supply markets that have prohibited illegal timber, including the EU, US, and Australia. The SVLK became mandatory for exporters in January 2013, and the EU Timber Regulation came into force in March 2013. 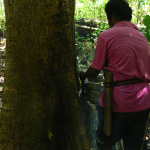 EIA Forests Campaign head Faith Doherty said: “It is imperative that Indonesia now properly investigates and prosecutes this case, including all the actors in the timber chain downstream from Sitorus and any protectors in the police or other authorities who have allowed his crimes to go unpunished for so long.”

The bulk of Sitorus’ timber seized in Surabaya was destined for China, although EIA has seen official trade data showing that known buyers of merbau from Sitorus’ company have subsequently shipped tens of millions of dollars worth of merbau to buyers in Europe, Australia and the US in recent years.

Doherty added: “Long-term police involvement in major illegal logging and export-oriented timber trade is of great concern to EU importers of Indonesian wood products, and no doubt to the EU itself which has been very supportive of Indonesia in the development of the SVLK.“

Doherty has been directly involved in the development of the SVLK with Indonesian civil society organisations since its inception.

“Just as the EU Timber Regulation comes into force, the Sitorus case makes it difficult to believe all is well in Indonesia’s timber trade,” she said. “It is imperative Indonesia protects the reputational gains the SVLK is bringing it by showing the world it can successfully prosecute this blatant case of police corruption.” 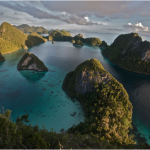 Papua’s merbau wood has been particularly targeted by illegal loggers and EIA has exposed numerous smuggling syndicates since 2005. However, the failure of a previous major case of police involvement in illegal logging – that of Marthen Renouw, also in the Sorong region of Papua, in 2006 – raises credible concerns that Sitorus may get off lightly in Indonesia’s notoriously corrupt judicial system, despite a Presidential Decree mandating various Government ministries to coordinate the prosecution of timber crimes in Papua.

Last week the head of PPATK confirmed he had identified transactions from Sitorus’ accounts to senior police officials.

EIA’s Doherty also stressed the need for the Government to ensure the security of formally sanctioned, independent timber trade monitors and whistleblowers, some of whom have received threats since the Sitorus case became public.