Retail sales grew strongly in the year to April and are expected to grow at an even faster pace next month, according to the CBI’s latest monthly Distributive Trades Survey.

The survey of 131 firms showed that sales growth in April improved from March, with sales now having increased year-on-year for the fifth consecutive month. Sales volumes are expected to rise again next month, with expectations for growth at their strongest since December 2010.

Internet retail sales continued to perform strongly, with the volume of sales rising at the highest annual rate since November 2012.

Sales in the motor trades sector also increased, but wholesaling sales were flat on a year ago.

“The high street has a spring in its step – retailers performed well in April and enjoyed a strong rise in sales compared with this time last year. It’s a welcome rebound from March, largely down to the later timing of Mother’s Day and Easter.

“This latest survey echoes the current drumbeat of positive economic news. The trick now is for this to become a consistent theme, and deliver much needed support to household spending and economic growth in the months ahead.” 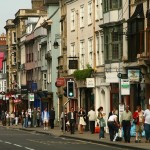 • 42% of respondents reported that sales volumes were up on a year ago, while 12% said they were down, giving a balance of +30%. This is a significant improvement on the sales growth seen in March (+13%)

• Retailers expect sales volumes to grow robustly again next month (+43%), with 48% expecting them to rise and 5% to fall. This is the highest expected growth since December 2010 (+45%)

• Sales grew across many sub-sectors:

• 27% of retailers said that total retail sales volumes were above average for the time of year, while 9% said they were below average, giving a balance of +18%, the highest since December 2010 (+18%)

• 34% of retailers placed more orders with suppliers than they did a year ago and 18% placed fewer, giving a balance of +15%, which was broadly in line with expectations (+12%).

• 88% of motor traders reported sales volumes to be up on last year and 9% said they were down giving a balance of +79%, which was significantly above expectations (+33%).