Optimism among UK manufacturers rose at the fastest rate since April 2010 as orders and output continued to grow steadily in the three months to October. That's according to the latest CBI quarterly Industrial Trends Survey.

Rising demand helped boost overall sentiment as well as optimism about export prospects for the year ahead, despite new export orders growing only slightly.

The investment intentions of manufacturing firms continued to present a mixed picture. Plans for spending on plant and machinery declined on three months ago but strengthened for 'intangibles' such as product innovation, where investment intentions were the strongest for six quarters. Meanwhile plans for spending on training and retraining were the strongest since October 1997.

Firms seem untroubled by inflationary pressures, with both domestic and export output prices declining marginally, while unit costs were flat.

"The manufacturing sector has increasing confidence in the UK's recovery with optimism about the general business situation improving to the greatest extent since April 2010.

"New orders and output are continuing to grow steadily and expectations for the next three months are promising.

"But there are only limited signs of rebalancing towards exports or investment, with marginal growth in export orders and firms scaling back plans for capital expenditure on plant and machinery."

· 32% of businesses said they were more optimistic about the general business situation than three months ago and 8% less, giving a balance of +24%, the highest since April 2010 (+24%)

· Manufacturers' stocks of raw materials, work in progress and finished goods were all significantly up on the last quarter (+12%, +13% and +14% respectively).

· A balance of +6% of manufacturers expect average unit costs to increase in the next quarter. 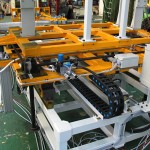 · Concern about a shortage of skilled labour acting as a constraint on output in the next three months was cited by 21% of firms, the highest since July 2012 (21%)

· Concern about political and economic conditions abroad as a factor likely to limit export orders was cited by 31% of manufacturers, slightly down on the last quarter, but ahead of the long-run average of 22%

· A survey record high of 18% of firms cited labour shortages as a factor likely to limit capital expenditure authorisations.