With the decision by the Bank of England to pump another Â£50bn of new money into the UK economy, and the ECB cutting its main rate to 0.75% – and its deposit rate to zero – central bankers have clearly decided that they need to provide more support to flagging demand. Even China got in on the act, cutting its benchmark rates for the second time in two months: its deposit rate now stands at just 3%. And with the prospect of a Greek exit from the euro still very much looming on the horizon, this latest round of monetary stimulus is unlikely to be the last.

At the same time, there is a growing sense that these policies are unlikely to be as useful as central bankers hope, at least in Europe. The ECB’s 0.25% cut means that overnight money rates in Europe may now be less than 0.1%, instead of around 0.3%. But that is unlikely to provide much extra succour to the economy. And while the massive long-term refinancing operations (LTROs) had an initial impact, they only quietened markets for a short period.

There are signs that the BoE is also getting a bit desperate. With the latest round of quantitative easing (QE), its asset purchases will now total Â£375bn – equivalent to a quarter of the UK’s annual economic output, or around 30% of total government debt. Essentially, the BoE has made it a lot cheaper and easier for George Osborne to borrow money, because just under a third of what he owes is parked in another part of the public sector. Yet while those companies with direct access to money markets have seen some benefit, ordinary people and small businesses are actually seeing the interest rates that they pay rise – quantitative easing hasn’t done them much good. There is a growing body of academic evidence that suggests the BoE’s claims about QE may be misleading.

So what should the central banks be doing instead? In the ECB’s case, if it genuinely wants to fulfil its role as the guardian of the euro then large-scale government bond purchases (a la BoE) may well be on the cards soon. A Greek exit – or sufficient market pressure on the likes of Spain and Italy – would expose the inadequacies of the existing firewalls that euro area governments have erected. Unless core countries commit more money, the ECB is the only player that can avert disaster. It does not want to do this, to be sure: the ECB Governing Council has come under significant pressure from the German establishment not to follow the Fed and the BoE. But, faced with a true meltdown, German politicians might relent. 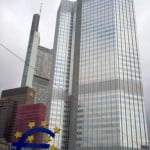 In the BoE’s case, it needs to work out how to get QE benefitting ordinary people. The ‘funding for lending’ scheme that was recently announced by the Chancellor and the Governor is another attempt to do that. But, fundamentally, it still has critical flaws. Because the scheme will only involve temporary supply of cash against new mortgages of business lending, the incentives for banks are slim – those without funding concerns like HSBC may not bother with it at all. Instead, the authorities should try outright purchases of (bundles of) small business loans, offering banks a quick (but small) boost to their balance sheets and no lasting credit risk. Yes, this would exposure the public sector to that same risk – but, as it stands, the BoE would face a paper loss on its gilt purchases if the economy suddenly did spark into life. Spending Â£50bn on private securities, at the government’s explicit instruction if need be, would struggle to make things much worse, and might just make things better.

Two of the most respected central bankers in the world are Ben Bernanke at the Fed and Adam Posen at the BoE. Both have incredibly useful insight to bring to bear – Bernanke on the Great Depression of the 1930s, and Posen on Japan’s more recent Great Recession. If they were still in academia, both of these men would probably be calling for central banks to make more imaginative use of their balance sheets. As it is, both probably feel constrained by their current positions. This is a shame – central banks have the tools to genuinely make a difference, and the right people to help them work out what to do. The main hurdle appears to be cultural: stepping into the uncertain may feel unnatural to such conservative institutions. But right now, we need our central bankers to be more creative. Otherwise, they risk making the same sorts of old-fashioned policy mistakes that they should already have learnt to avoid.

How soon will we ‘feel’ growth?