The Chancellor George Osborne will today launch the start of the Northern Hub rail upgrades, a £600 million rail investment programme set to create up to 20,000 jobs and boost the northern economy by billions of pounds.

The Chancellor will visit the start of construction at Manchester Airport station, marking the first phase of a project which spans the north of England.

The project is a key part of the government's long-term plan to rebalance the economy and boost growth across the country. Network Rail estimate the wider economic benefit to the region will be worth £4 billion, as well as providing significant long-term benefits to passengers by increasing capacity and cutting journey times.

The improvements will transform the rail network in the North of England by electrifying existing lines as well as providing major upgrades to the network in and around Manchester. When completed in 2019 the upgrades will allow up to 700 more trains to run each day, providing space for 44 million passengers to the area a year.

The Chancellor will say:

"The government's long term plan is about securing a recovery for all parts of the country. Because of the tough decisions we've taken on day-to-day spending, we're able to invest in key infrastructure projects like the Northern Hub, which will create billions for the region.

"Each part of this project, like the first work at Manchester Airport station that I've kicked off today, will help us build the infrastructure we need to compete in the global race.

"This investment will ensure growth is not concentrated in any one place by keeping Britain connected and creating thousands of local jobs, delivering a brighter economic future for the whole country." 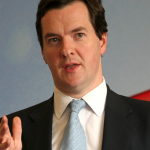 The Chancellor will see the beginning of works forming a £20 million investment to improve the rail link and station at Manchester airport.

Manchester is the third biggest airport in the UK after Heathrow and Gatwick, and saw 20 million passengers travel through it last year. The investment will enable better connections for businesses and travellers to the Airport City Enterprise Zone and encourage even more growth in the area.

The Northern Hub is one of the government's top priorities as set out in the National Infrastructure Plan, and is part of record investment in our railways.