Changes to Board of Directors of London Stock Exchange

London Stock Exchange Group plc (LSEG) today announces that Stephen O'Connor and Stuart Lewis will join the LSEG Board as Non-Executive Directors with immediate effect. Janet Cohen, Sergio Ermotti and Gay Huey Evans will step down from the Board following the Group's Annual General Meeting on 18 July, at which confirmations of the new appointments will be sought.

These new appointments of skilled practitioners in credit and market risk reflect the significant and growing proportion of the Group's overall business that post trade and risk management now represent.

"It has been a privilege to have Janet Cohen, Sergio Ermotti and Gay Huey Evans on the Board. I would like to thank them for their valuable contributions to the successful strategic development of our business: Janet for her unstinting service and wise counsel over 12 years; Sergio for the deep market experience and knowledge he has brought to the Board since the merger with Borsa Italiana; and Gay for her regulatory and markets expertise.

"We warmly welcome Stephen O'Connor and Stuart Lewis to the Group, and to the Board. Their considerable experience in some of the more complex areas of our industry will be of great value to the organisation as we continue to drive our business forward with strong governance and sound counsel, focused on delivering shareholder value. I very much look forward to working with them."

Stuart is currently Chief Risk Officer and Member of the Management Board at Deutsche Bank AG, having previously held senior roles at Deutsche Bank AG since 1996. From 1992 to 1996, Stuart worked at Credit Suisse Financial Products in Credit Risk Management and, from 1990 to 1991, at Continental Illinois National Bank. 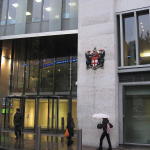 Stephen is currently Chairman of the International Swaps and Derivatives Association, a position held since 2011, having been appointed as a Non-Executive Director in 2009. Stephen worked at Morgan Stanley in London and New York from 1988 to 2013, where he held a number of senior positions including Head of Counterparty Portfolio Management and Head of OTC Derivative Clearing. Stephen was a Non-Executive Director of OTC DerivNet Ltd from 2001 to 2013 and was Chairman from 2001 to 2011. He is also a member of the CFTC Global Markets Advisory Committee.

There are no other matters relating to the new directors which would require disclosure under Listing Rules 9.6.13R.