Summary: There were two main pieces of economic news this week, both relating to the labour market. Over the weekend it was reported that in real terms the average wage in the UK is falling faster than most of the rest of Europe. It was then announced this morning that total employment in the UK has risen again to its highest ever level.

What does the chart show? This week's chart by the Economic Research Council shows both employment and earnings. The blue line, measured against the left hand axis in millions of people, shows the total number of people aged 16 and over in employment over the preceding three months. The red line, measured against the right hand axis in pounds, shows the average weekly earnings (reported monthly) adjusted for inflation (so they are in today's prices), including bonuses.

Why is the chart interesting? These two related news stories paint two very different pictures of the UK economy. On the one hand, the total number of people in employment is at an all-time high. This is partly due to population growth, reflected in the unchanged unemployment rate, and partly due to the higher number of over-65s in employment; but nevertheless it is a positive sign for UK economic growth. On the other hand, real weekly earnings have shown no significant signs of recovery since the recession in 2008, and look set to continue to fall. Lower earnings could lead to lower household expenditure, which would hinder growth.

On an interesting side-note, the sharp peak in earnings at the beginning of 2007 and 2008 represent large bonus payments, accounted for in February of each year. The peak in 2008, just before the financial crisis, is the most extreme. Conversely, the dip in 2009 was caused by an unusual show of restraint during bonus season. 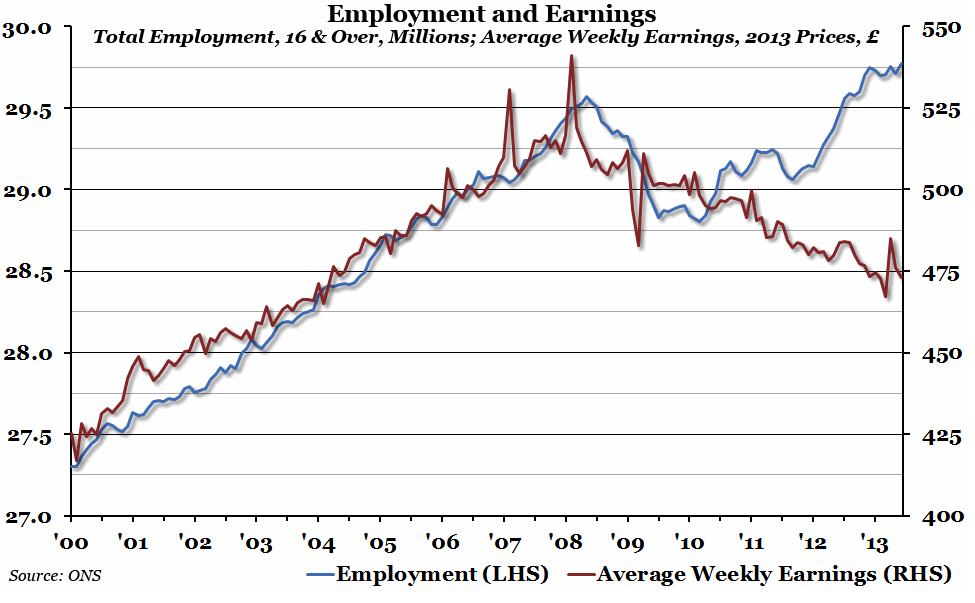