Summary: It has been a quiet week in terms of economics news, although in Europe talk is intensifying concerning whether or not Greece shall need another bailout from the European Central Bank and the European Union.

What does the chart show? This week’s chart is a bar graph showing the surpluses and deficits of several governments as a percentage of their GDP, measured in the first quarter of every other year. The countries featured are France and Germany (the two biggest economies in the euro zone), the UK, and those countries whose economic affairs have been highly publicised in recent years, namely Ireland, Greece, Portugal and Spain. Please note that the latest figures available for France and Germany are for Q4 2012, rather than Q1 2013.

Why is the chart interesting? The chart courtesy of the Economic Research Council comes as speculation grows concerning Greece’s finances in the coming months. Germany’s finance minister, Wolfgang Schaeuble, said on 20th August that Greece will need a further bailout, although this puts him at odds with his own boss, Chancellor Angela Merkel, who has an election to fight in September and who knows that talk of bailouts is a very sensitive issue among German voters.

The chart shows just how fragile the Greek economy is in the current economic unease, with a deficit of 17.5% of GDP last quarter, whilst the particularly sharp fall for Ireland from a 1.3% surplus in 2007 to a 13.1% deficit in 2009 shows the period during which the government was forced to bail out its banks (and from which the country has yet to make any substantial recovery). Note also that Germany is the only country shown whose deficit has managed to stay consistently low over the period shown, despite the Euro Zone recession and the bailouts of which it is the main creditor. Indeed Germany’s biggest deficit occurred in 2005, before the recession had begun.

The UK has fared relatively well in comparison to the other countries shown. In 2009, the worst year for the UK, it had the second smallest deficit (7.7% of GDP), beaten only by Spain, which recorded a deficit of 5.7% of GDP. Interestingly, prior to this deficit, Spain had a surplus of 4.3% in 2007, which provides an illustration of the severity of its present recession. 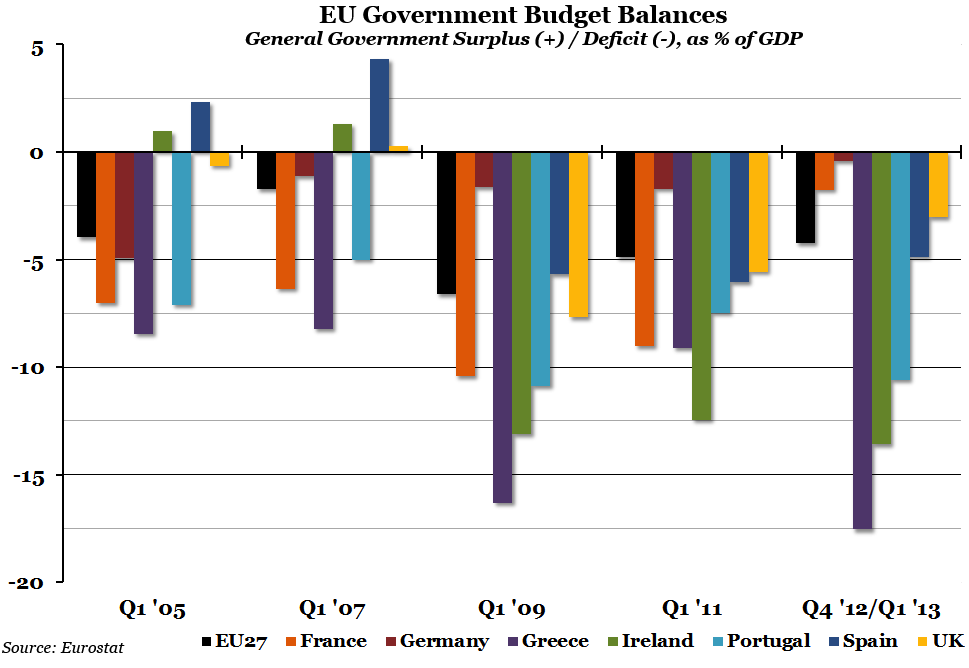