Summary: Eurostat released the European Union's latest unemployment statistics at the end of last week, and they showed an overall rate of 12% in December 2013, compared to 11.9% in December 2012. However, as you'd expect, there are vast regional differences.

What does the chart show? The chart supplied by the Economic Research Council shows the latest available unemployment rate (the percentage of people who are looking for a job but who can't currently find one) for each of the 28 EU countries. The red bar shows the total unemployment rate, while the blue bar shows the unemployment rate for people aged under 25. For most countries, the latest available data is for December 2013, with a few exceptions: for Estonia and Hungary, it is November 2013; for the UK and Greece it is October 2013; and for Latvia and Romania it is September 2013.

Why is the chart interesting? While the overall unemployment rate might be 12%, it is lower in most individual countries across the EU (but is dragged upwards by countries such as Greece, Spain, Cyprus, and the new member, Croatia). However, youth unemployment remains very high in most countries (more than 20% in 21 out of the 28 countries), and is an acute problem in Croatia (49.2%), Spain (54.3%) and Greece (59.2%).

The United Kingdom's unemployment figures compare favourably with the rest of the EU, especially considering the Eurostat numbers don't include the latest news from the ONS suggesting further decreases; the UK has the 8th lowest youth unemployment rate and the 9th lowest overall unemployment rate. 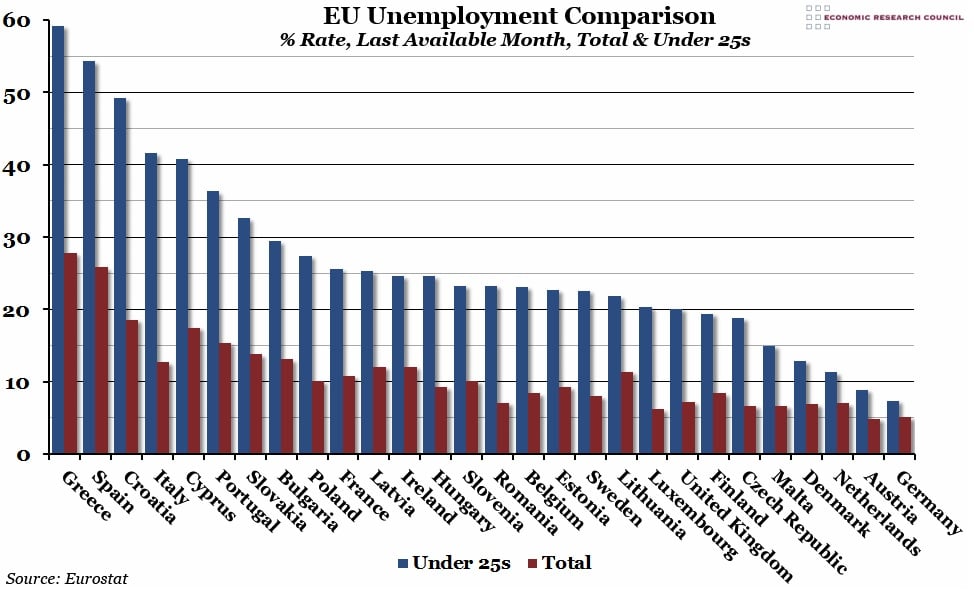 Is the Housing Market Recovery a Fake?