Summary: Now that the US debt crisis is over (until next time a deadline looms), we can turn our attention back to Europe. Second quarter government finance data was released by Eurostat this week, which showed an increase in debt-to-GDP ratios in almost every country.

What does the chart show? The chart from the Economic Research Council shows the quarterly total of gross debt held by a selection of European governments as a percentage of their gross domestic product (GDP). This is the amount of debt held by the "general government", which is a combination of central and local governments. The black line is the average for all 27 current EU countries, regardless of whether they were a member of the EU at the time or not.

Why is the chart interesting? There is a lot going on in this chart, but broadly speaking, the chosen countries can be broken down in to three groups. Back at the turn of the century, Italy and Greece were the high debt countries, with debts of over 100% of their GDP. Then there was the main bunch of countries around 60%, including France, Germany, and Sweden. At that point, the UK and Ireland were relatively low in debt, at about 40%-45% of their output. Over the course of the next seven to eight years, the average hovered around a bit, but nothing changed much. Both Spain and Sweden cut their debt-to-GDP ratios to around the level of the UK, while Ireland's dropped to only 25%.

When the financial crisis hit in 2008, debt-to-GDP ratios rose rapidly, partly due to falling GDPs, but also because government deficits worsened. In the high-debt group, Greece peaked at 170%, and is heading that way again. Portugal shot up from the middle group to 130%, while Ireland rocketed from around 25% to 125% of their GDP over five years. Meanwhile, the EU average rose significantly, and the UK and Spain both now have more than the average level of debt-to-GDP. Sweden (along with the other Scandinavians and a few Eastern European countries), however, managed to keep their debt-to-GDP ratios manageable throughout the crisis, and are helping to keep the EU average under 100% at the moment. 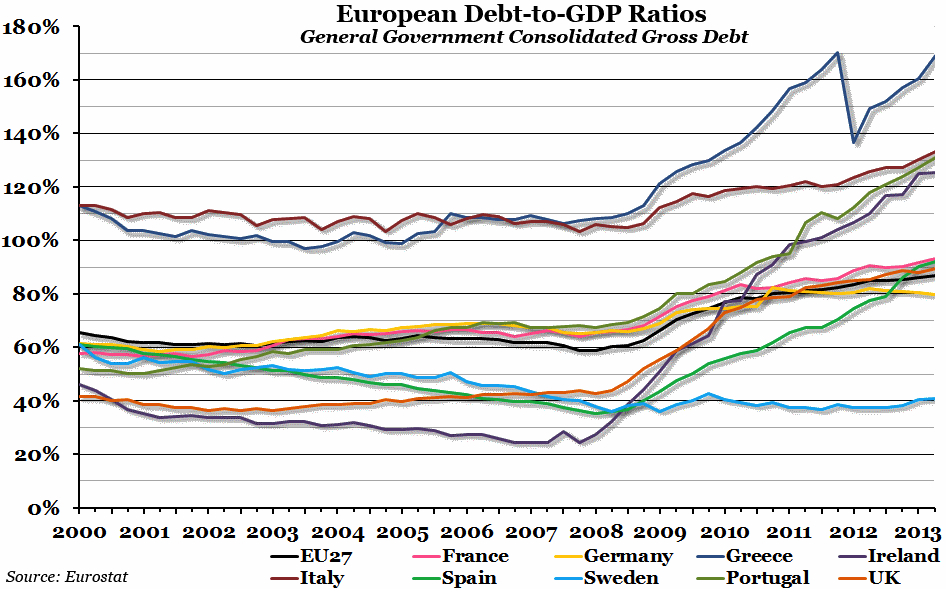