Summary: The Chancellor will today announce the government's plans for departmental spending over the next year in his spending review, so the Economic Research Council has taken a look back at how government spending has changed over the past two decades.

What does the chart show? The chart shows public sector expenditure by function, in billions of pounds, adjusted for inflation (in 2011-12 prices). The six functions included make up over 80% of all government spending. The categories are all fairly self-explanatory, with the exception of the nebulous "Economic Affairs", which encompasses "economic and enterprise development" (including financial interventions), "science and technology", "employment policies" (but not unemployment benefit), "agriculture, fisheries and forestry", and "transport".

Why is the chart interesting? Over the past twenty years, you can see that three categories of public spending have increased considerably (social protection, health, and education), while three have remained at roughly the same level in real terms (defence, economic affairs, and the interest payments on our debt). For example, we are now spending more than double the amount on healthcare that we did twenty years ago in real terms, while spending on economic affairs and defence has only gone up by Â£3bn (a small amount in national terms).

However, in the shorter-term, spending on almost all functions has decreased, with the exception of three: debt interest (which has risen by almost half since the last elections), social protection, and EU transactions, which have not been included in this graph. – See more at: http://www.ercouncil.org/chart-of-the-week/week-26-2013-government-spending-by-function.html#sthash.ZBScJAxv.dpuf 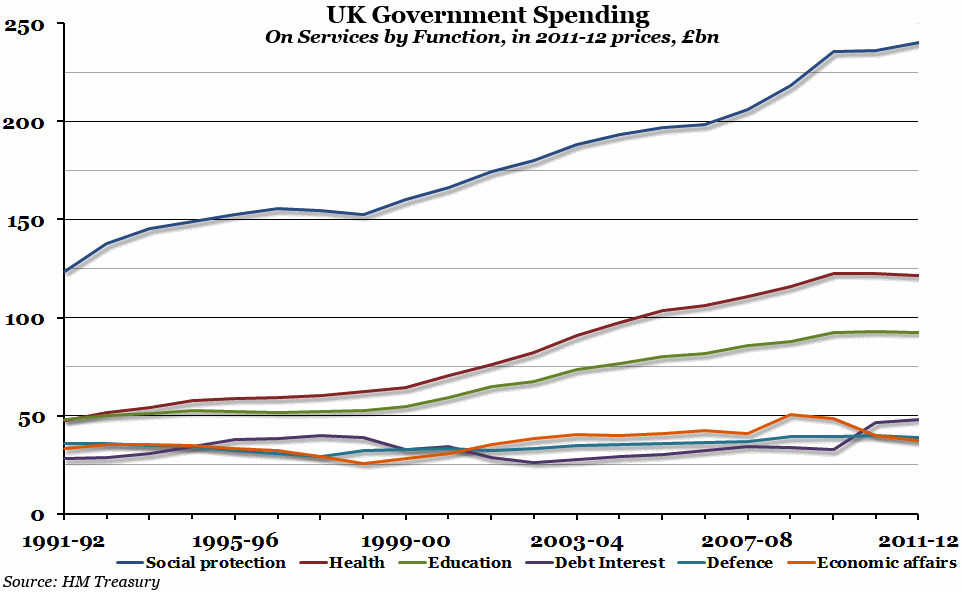