Summary: As the deadline for the US Government to reach an agreement on the debt ceiling looms (it is, in theory at least, tomorrow), the Economic Research Council takes a look at who holds most of the debt, and what that means in the face of a potential default.

What does the chart show? The chart below from the Economic Research Council shows the holders of all US Treasury Securities (which includes all public debt securities) in trillions of dollars, broken down in to categories. These categories are: individuals in orange, financial institutions (including mutual funds, banks, insurance companies, and pension funds) in red, the monetary authority in green, foreign and international holders in purple, and other holders (including state and local government, and non-financial institutions) in blue.

Why is the chart interesting? Whether a deal will be done in time before the deadline is questionable, but it is thought unlikely now to lead to a default (straight away, at least; unless the stalemate drags on for months, there are ways to fund the debt payments). Of course, default or not, any failure to reach an agreement would be hugely damaging to the international reputation of the USA.

As of the second quarter of this year, almost half of all US securities are held by foreign and international investors, so the international concern over the current crisis is understandable. There has been some talk about prioritising debt payments over other planned expenditure, but the political backlash from being seen to be paying foreign holders of US debt over American war veterans (for example) could be huge.

The next biggest group holding the debt are financial institutions, of which pension funds represent a third (and their share is growing; in fact, pension funds are the only element of the "financial institutions" group to have been increasing their holdings of Treasury securities this year). Any default would hit these groups hard as well. The third biggest creditor is the monetary authority, which owns 16% of the securities. Bearing in mind that they are printing money to lend to the government with the express purpose of funding spending, this is about the friendliest debt imaginable, and this is where the ERC says it would imagine any non-payments would be concentrated (if possible). (Click on the chart to expand it.) 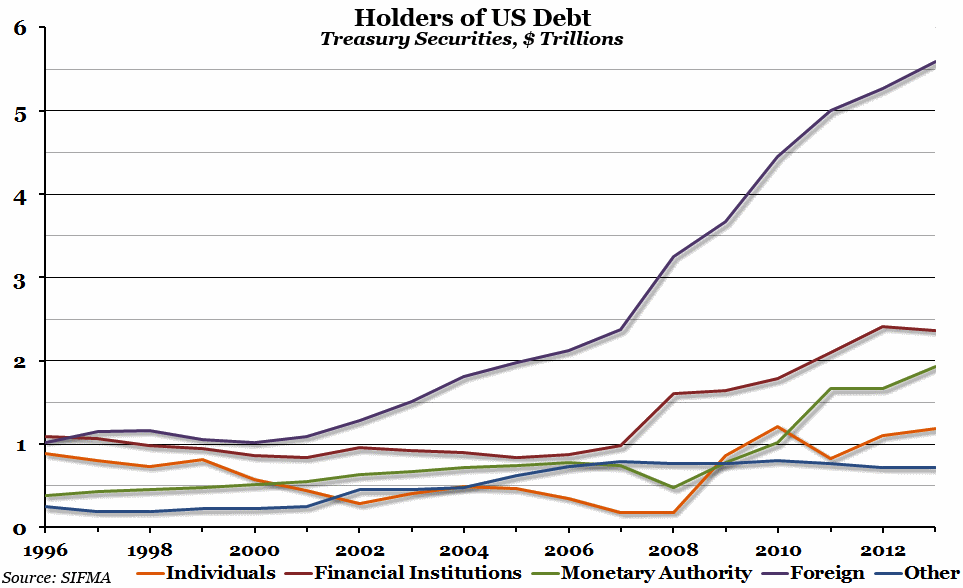