Summary: Second quarter GDP growth in the UK was estimated last week to be 0.6%, a relatively positive figure considering recent non-growth. In the wake of this, we've updated our international recovery chart to show how the UK is doing relative to the other G7 economies.

What does the chart show? The chart below from the Economic Research Council shows an index of Gross Domestic Product (GDP) for each of the G7 economies. The index is calculated using constant prices in the relevant local currency, and adjusted so that its value at the pre-recessionary peak (which differs across countries, but for our purposes counts as the first quarter of 2008) is equal to 100. This means that any value above 100 represents a higher real level of national output than before the recession hit, and vice versa.

Why is the chart interesting? This chart highlights the differences between the recoveries experienced by the G7 countries. At one end of the scale you have Canada, barely touched by the crisis at all and now with an output around 6% greater than it was at the beginning of 2008, followed by the USA and Germany, who have both also recovered well (at least in GDP terms; the USA is one of the few G7 members whose level of employment is still much lower than it was pre-recession).

The other four countries have not yet reached their pre-recession level of output. France initially appeared to be recovering at the same pace as Germany and the USA, but has since stagnated, while the UK economy has been trundling along at around 95-96% of pre-recession GDP. By contrast, the Japanese economy has experienced a triple-dip recession, but now appears to be recovering. Finally, you have Italy, who initially followed a very similar pattern to the UK, but have been shrinking rapidly since the middle of 2011 with no imminent sign of recovery! 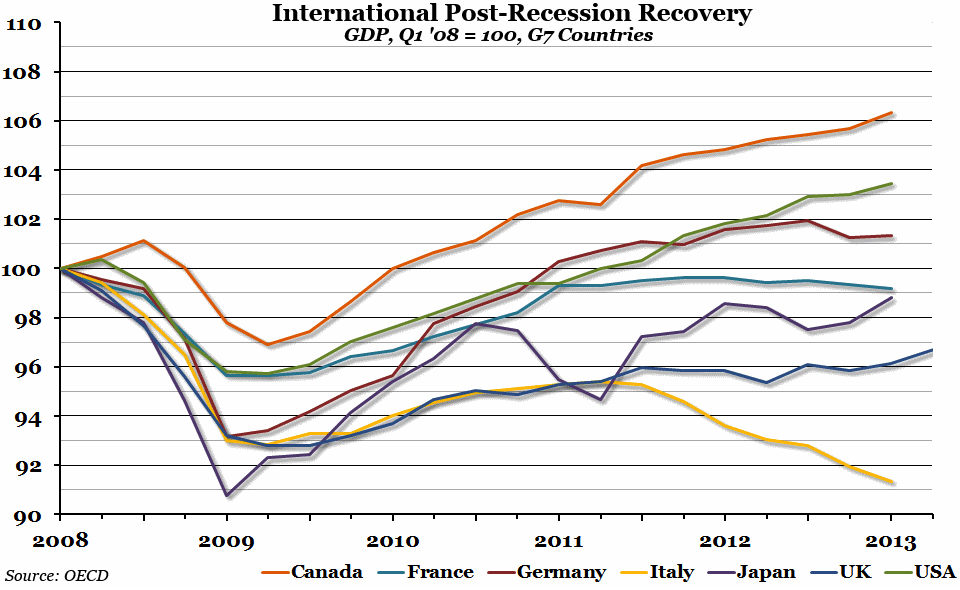