CHART OF THE WEEK: Projected Per Capita Tax and Spend

Summary: The Office for Budget Responsibility released their annual Fiscal Sustainability Report today, which among other things included this week's chart showing their projections for per capita tax and spend in 2020/21.

What does the chart show? The chart shows the official OBR projections for how many thousands of pounds the average (representative) person of each age will be paying in tax (the blue line) and costing the government (the red line) by the 2020/21 fiscal year. The dotted lines give a bit more detail about the cost breakdown, with the orange line showing education costs, the purple line health costs, and the green line long-term care. These are not the only categories, but they are the only ones that the OBR has given specific details of.

Why is the chart interesting? The graph from the Economic Research Council is interesting because it shows the breakdown of how different age groups are expected to be either a net positive or negative influence on the government's fiscal balance in the near future. Up to the age of 24, government services consumed are mostly in education and outweigh tax payments (which presumably in the very early years only include indirect taxes on items purchased on your behalf). Between the ages of 25 and 65, the average individual is expected to pay more taxes in to the system than they "take out" in services consumed each year, and although education costs drop to nothing over this period, healthcare starts to become an increasing cost. After the age of 65, as taxes paid drop away and healthcare and long term care costs begin to increase significantly, individuals once more begin to cost the government more than they pay in.

Although this graph shows a projection based on a very specific period of time and is therefore not designed to make any predictions about the net cost of individuals over their whole lifetime, it is nevertheless interesting to consider the implications on an individual if these 2020/21 projections were to remain constant over a whole lifetime. In this highly unlikely scenario, the average individual would only become a net lifetime contributor to the state at the age of 53, and would remain so until they reach 80. If they were lucky enough to live longer than 80 years, they would once again become a net lifetime recipient of government funds. 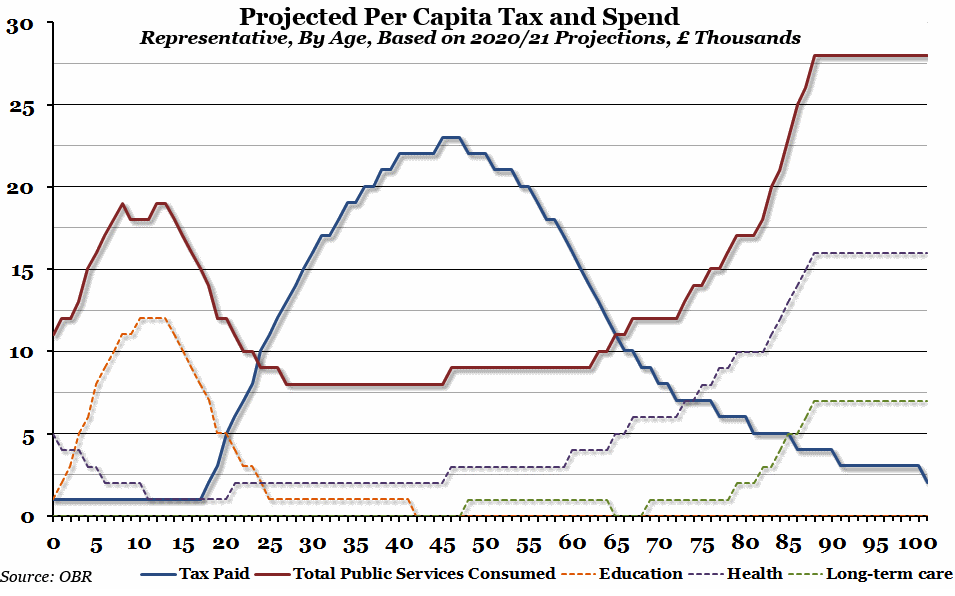