Summary: As the new Bank of England Governor, Mark Carney, enters his first Monetary Policy Committee (MPC) meeting today, the Economic research Council takes a look back at the past 15 years of UK monetary history.

What does the chart show? The chart shows three things. The red line represents the total money supply (using the M4, or broadest, definition, but excluding intermediate "Other Financial Corporations" (or OFCs)) in billions of pounds, measured against the right hand axis. The blue line shows the annual percentage change in the CPI measure of inflation that the MPC is currently charged with keeping within a percentage point of 2% (marked by the solid and dotted black lines), measured against the left hand axis. Finally, the green line shows the interest rate that the Bank sets (the Repo Rate until 2006, the Bank Rate from 2006 onwards) to try to achieve its goal (also measured against the left hand axis).

Why is the chart interesting? Although George Osborne said in the recent budget that the MPC would be allowed more flexibility in their targets, their official aim remains keeping the CPI around 2%. As you can see, until mid-2007 they largely achieved that goal, with only a few exceptions. Since then, however, the CPI has been above 3% more often than it has been below it, as growth has become an unofficial priority.

Governor Mark Carney currently has two main tools at his disposal. The first is changing the official "Bank Rate", which has been set at 0.5% since 2007, but has historically been much higher (between 4% and 8% since the beginning of the 1990s, but even higher than that previously). The second is expanding the asset purchase programme, known as "quantitative easing", which in theory pumps newly created money in to the economy. The total money supply doubled in the decade before the crisis, but since then M4 growth has slowed somewhat, boosted only recently by the Bank's efforts.

Chart from the ERC: 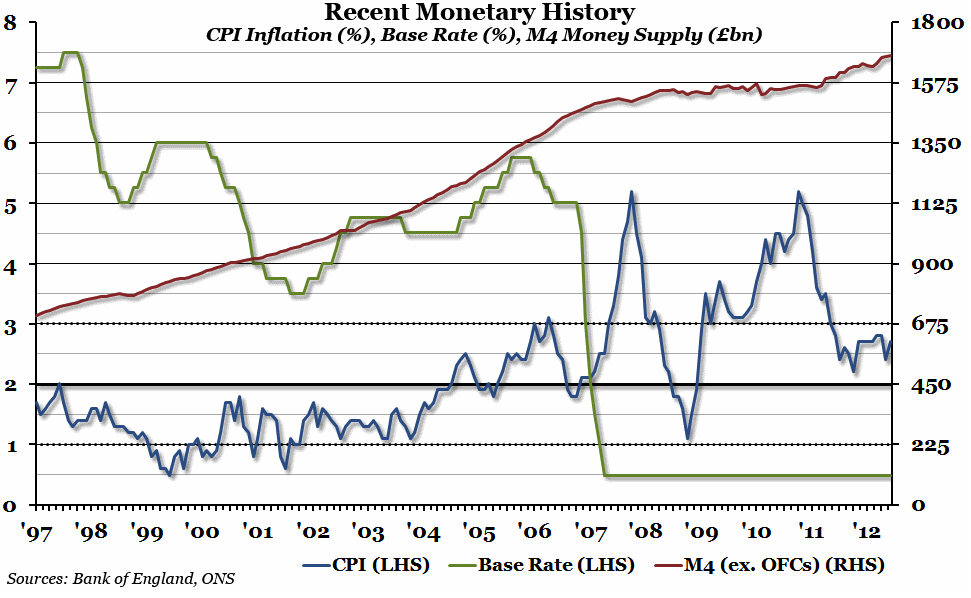 Could firms do more to avoid the crisis hitting high streets

Cameron's battle to show us he is the man