Summary: Back in June, the Economic Research Council produced a chart showing government spending by function. They received a lot of feedback asking for a version which showed where the money came from, so here it is: a breakdown of government revenue by source over time.

What does the chart show? The chart below by the Economic Research Council shows general government (meaning both central and local government combined) receipts by source, in billions of pounds, adjusted for inflation (in 2012-13 prices). The five sources shown are the largest sources of income for the government: taxes on income and wealth, taxes on production, compulsory social contributions (National Insurance), other taxes (including taxes on capital), and interest and dividends (from both private and public sector loans and investments).

Why is the chart interesting? Although the relative significance of each source of income has not changed much over the past twenty years, the scale certainly has (which is to be expected as expenditure has increased). Taxes on income, wealth and production bring in an additional Â£150bn in real terms compared to 1991/92, and social contributions another Â£50bn extra, despite the general decline in tax revenues following the economic crisis in 2008. In fact, the only category that hasn't changed much over the twenty year period is the income received from interest and dividends. (Click the image to expand it.) 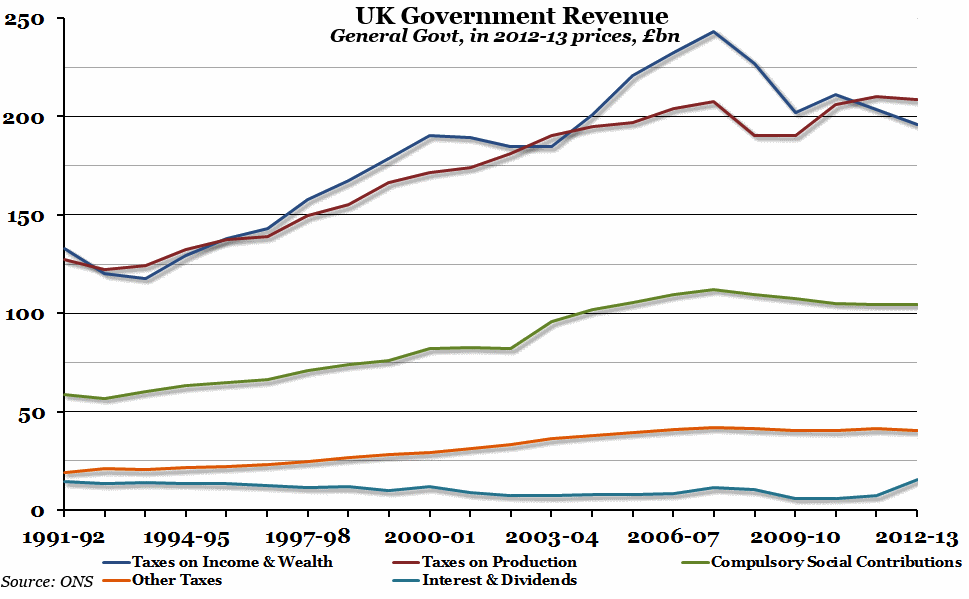 Preparation is key when it comes to Payroll Year End reporting, writes Michael Richards of webexpenses