What does the chart show? The blue line on the chart below supplied by the Economic Research Council (ERC), measured against the left hand axis, shows the total number of households (in thousands) that do not contain anyone who is currently working, over the period April-June each year. This includes both the unemployed (currently looking for work) and the inactive (not looking for work), although only households which contain at least one person aged between 16-64 are counted. The red line, measured against the right hand axis, shows the subset of households where all occupants have never been in paid employment, except for casual or holiday work (also in thousands). Households containing only students aged 16-24 are excluded from this measure. Finally, the yellow line shows the number of children aged under 16 currently living in households where nobody has ever worked (this is also measured against the right hand axis, in thousands).

Why is the chart interesting? Two years ago, the number of households where nobody had ever worked was at a peak, and the ERC pointed out that over 300,000 children were growing up in households that didn't have any experience of working. Since then, excellent progress has been made; there are now 67,000 less households with no experience of work. This is the lowest level since 2003, and the number of children growing up in these households is at the lowest level since 1998 (although the total number of under 16s is lower now than it was back then). The number of currently workless households has also continued to fall, and is now finally back down to pre-recession levels. 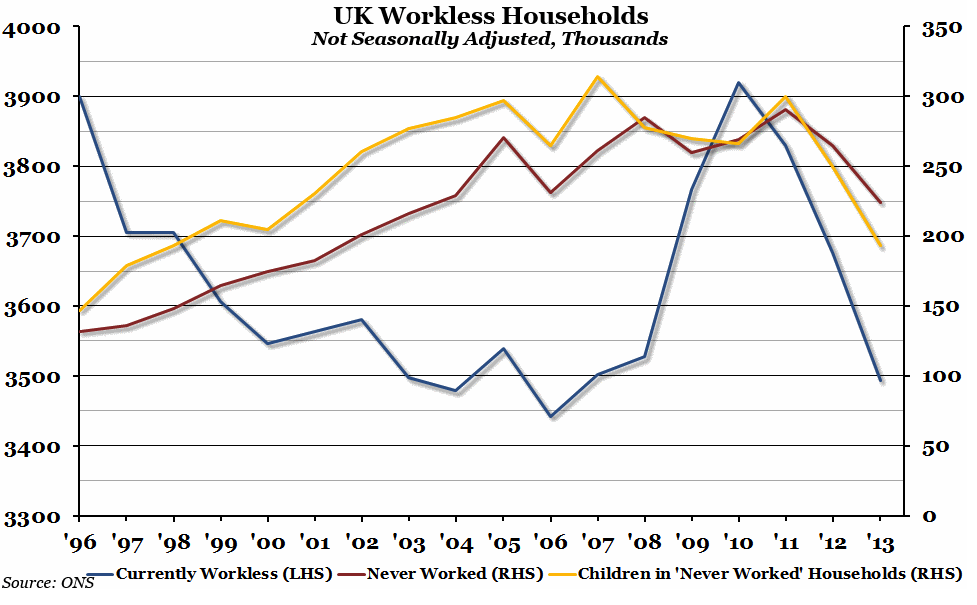