So much for the lessons of Fukushima. Never mind oil spills, the Russian Federation is preparing an energy initiative that, if it has problems, will inject nuclear material into the maritime environment.

Baltiysky Zavod is Russia's biggest shipbuilding complex. According to Voznesenskii, the "Academician Lomonosov" FNPP will be the first vessel belonging to the new line of floating nuclear power plants that can provide energy, heat and water to remote and arid areas of the country, with mass production scheduled for the near future.

The "Academician Lomonosov's" technology is based on the USSR's construction of nuclear-powered icebreakers. The Russian media is speculating that the FNPPS will first be used in remote areas of the northeastern Arctic Russia and the Far East, as these regions currently suffer from a lack of energy, slowing their development. Each 21,000 ton vessel will have two "modified KLT-40 naval propulsion reactors" that will provide up to 70 megawatts of electricity or 300 megawatts of heat, sufficient for a city with a population of 200,000 people. Additionally, the floating NPPs can provide water desalination services capable of supplying up to 240,000 cubic meters of fresh water per day.

Perhaps referring to Soviet-era nuclear icebreakers is not such a hot idea, at least for those with historical memories.

Launched in 1957, the Lenin, the USSR's first nuclear powered icebreaker, was powered by three OK-150 reactors. In February 1965, there was a loss of coolant incident, and some of the fuel elements melted or deformed inside reactor number two. The debris was removed and stored for two years, and subsequently dumped in Tsivolki Bay near Novaia Zemlia two years later. The second accident was a cooling system leak, which occurred in 1967, shortly after refueling (anti-atom.ru/ab/node/1065).

Not a reassuring development for the Soviet Arctic environment.

But, not to worry.

The Baltiskii Zavod shipyard stressed that The "Academician Lomonosov" and its successors are all designed with a safety margin exceeding all possible threats which makes its nuclear reactors invulnerable to tsunamis and other natural disasters and the ships meet all the requirements of the International Atomic Energy Agency (IAEA) and do not pose a threat to the environment. The factory further states that 15 nations, including China, Indonesia, Malaysia, Algeria, Namibia and Argentina have already expressed interest in buying floating nuclear power plant. 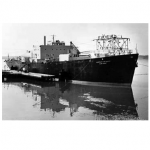 The "Academician Lomonosov"will be sent to Vilyuchinsk, Kamchatka for operational testing. Rosatom then aims to construct seven more FNPPs by 2015, with four of them likely to be located on the northern coast of Siberia's Yakutia. Other Arctic areas provisionally scheduled to receive FNPPs include port cities along the Russian Federation's arctic coastal Northern Sea Route and Pevek in Chukotka. An added benefit of the FNPP as envisaged in Moscow is that the provision of nuclear power to the Arctic and Far East will free up more oil and natural gas for foreign export, allowing the Russian federation to generate additional hard currency.

Tow cables snap, Arctic conditions can be unpredictable, ships sink. As the ocean is the common heritage of humanity, perhaps the international community might evince a tad more interest in this project.