China pollution film 'Under the Dome' a game-changer

Endemic health problems caused by pollution – the subject of a new documentary rocking China – will increase unless officials drastically cut development, according to a Chinese pollution policy expert at the University of East Anglia (UEA).

The film, ‘Under the Dome,’ viewed more than 100 million times since its online release on Saturday, has touched a nerve in a country accustomed to accepting acrid air and widespread water pollution. In the documentary, former state television reporter Chai Jing investigates the smog synonymous with China’s urban areas, which is thought to contribute to health issues such as the a benign tumour discovered in Chai’s baby before her birth.

UEA Prof Dabo Guan praises the documentary as a piece of sound research that is challenging accepted notions of pollution as a fact of life in China.

“Technically it’s not difficult to find solutions to China’s air and water pollution, but it’s a trade-off that government officials aren’t willing to make.

“Both central and local government officials in China hold social stability as their highest priority, and that stability is dependent upon a thriving economy that’s driven by development.

“Boosting the construction sector is a shortcut for economic growth, but it drives a dirty production supply chain. Steel, cement, bricks, glass and chemicals all contribute to the air and water pollution causing suffering not just in urban China, but also in rural agricultural areas.

“It’s a vicious cycle. Even though there is significant over-production, large industrial manufacturing employs thousands of labourers. Cutting production would mean unemployment, and the subsequent social instability the government fears.”

National dialogue about pollution is continuing in China, with more than 280 million posts appearing on a single Chinese microblogging site in the days after ‘Under the Dome’ was released. 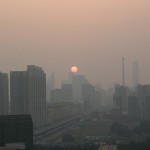 Prof Guan said: “If Chai’s excellent analysis of China’s deplorable pollution problem can even slightly alter the government’s tunnel vision on economic growth, she will have achieved something no one else has managed in decades of lobbying for a more sensible approach to the country’s future.”

Chinese Inventors Battle It Out For Edinburgh Design Award